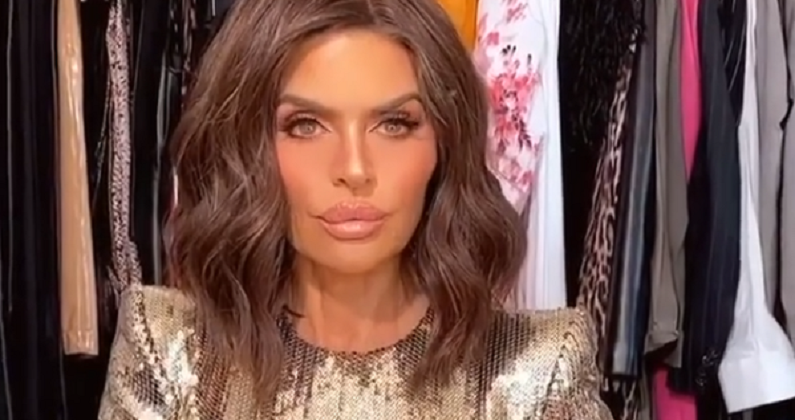 Lisa Rinna has been spending a lot of time shading her fellow RHOBH costars on social media. The Bravo star is no stranger to controversy. She recently took to her Instagram Stories to stir the pot once again.

This comes after she threw shade at her fellow costar, Garcelle Beauvais, on several occasions. She didn’t take too well to Garcelle’s latest comments on her Instagram dancing videos. Rinna especially didn’t like it when Garcelle brought up her daughter on Wednesday’s episode.

As retaliation, both Rinna and her daughter, Amelia Gray Hamlin, fought back at Garcelle’s comments on social media. Now, she’s firing back at Denise Richards once again.

That’s what RHOBH fans think. On Friday, August 14, Lisa Rinna took to her Instagram Stories to post not one but two cryptic messages. A fan who goes by the name @bravohaus thinks that Rinna is feeling some type of way after #PuppyGate and #ScissorGate.

“I was right about last year. I’ll be right about this time too,” Lisa wrote in one of her posts, adding, “Hi Haters!”

Then in a follow-up post, she added, “Oh s***. I may have just gotten myself a cease and desist.”

RHOBH fans think Rinna is referring to the cease and desist letter that Denise issued earlier this year. Following the taping of the Season 10 reunion, she took to her Instagram Stories to slam the “bulls****” reunion. Rinna said they couldn’t talk about Denise and Brandi Glanville’s alleged affair because of the letter. In other words, she wasn’t happy.

She previously slammed her RHOBH co-star

Lisa Rinna previously threw shade at Denise Richards in a now-deleted post on her Instagram Stories. She shared a screenshot of Denise’s at-home confessional and asked her followers if they thought Denise was “wasted” during the episode. Although Rinna deleted the post, it immediately went viral on social media. @Bravohaus and other fan accounts reposted her question. So much for Rinna and Denise’s 20-year friendship. The latest episode showed the long-time friends hashing things out and working on their relationship.

In a since-deleted Instagram video posted on August 11, Lisa Rinna also threw shade at her fellow costar, Garcelle Beauvais. She filmed a video of herself dancing to Kanye West’s song “Gold Digger” in a Skims bodysuit by Kim Kardashian West.

In the caption, she wrote, “Trigger warning!!! Dancing in my underwear may cause an eating disorder! Proceed with CAUTION HENNY. I do love my @skims.”

Look at the caption 💀💀💀#RHOBH pic.twitter.com/BbgY7iVjlY

Before she deleted the post, Rinna removed the “eating disorder” comment, as per Reality Blurb. In its place, she included a series of crying and laughing emojis.

This comes after Garcelle called out Rinna’s dancing videos. She feels that the social media posts are not appropriate if someone’s daughter has body image issues. On the show, Rinna revealed that her Amelia has struggled with an eating disorder.

On social media, however, Rinna is making it clear that she’s having the final say on things.