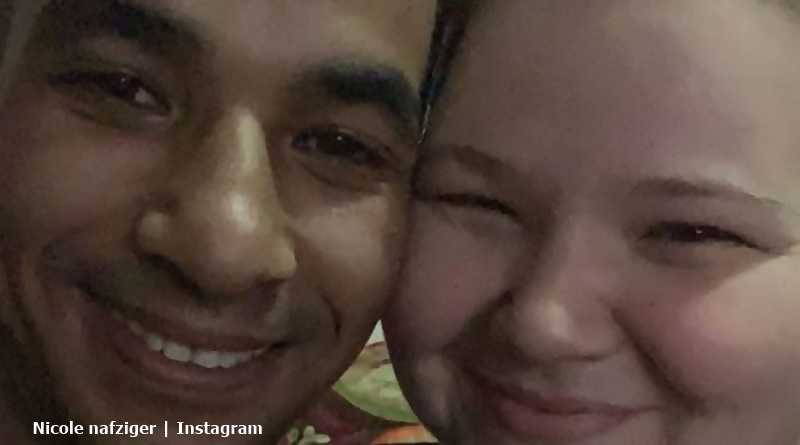 90 Day Fiance fans became confused about Nicole Nafziger a few weeks ago. She shared a photo of an ultrasound. Later, she apologized for the confusion, saying it wasn’t her pregnancy. Now her sister gave birth, and Nicole seems to have baby fever. It sparked rumors that she fell pregnant while visiting Azan in Morocco.

We reported last week, that although Nicole apologized for any misunderstanding over the pregnancy issue, that she and Azan actually became engaged. Around about the same time, her mother noted on her Instagram, that Nicole’s sister is expecting. On Friday, Nicole took to Instagram and announced that her sister gave birth to her baby. Using the hashtag #babyfever, was all it took for 90 Day Fiance fans to assume that she’s pregnant, or planning a baby as soon as possible.

Fans of the TLC show expressed their joy when Nicole got canned by the network. In fact, they grew sick and tired of the fact that she and Azan repeatedly featured on the show. And, they never actually got engaged or married. Fans called her and Azan the “90 Year Fiance” show. But, that doesn’t mean that fans lost interest in her. In fact, she gets nearly as many critics and fans following her as she ever did. Now she returned from Morocco, fans still think she tells lies or seems delusional about Azan ever marrying her.

Fans fear for her daughter May – more pregnancy rumors

InTouch Weekly reported that Nicole returned to the USA from Morocco on August 6. Fans immediately slammed her for reuniting with her daughter without quarantining for 14 days. Aware of the criticism, when Nicole shared a photo of her with her sister’s baby she noted that she underwent a COVID-19 test. So, it looks like she’s acting responsibly in that regard.

Nicole captioned the photo with, “My sister just gave birth to her first born baby, Adrianna😍😍😍😍 I am so in love with this little baby! Just gives me so many memories of May when she was just born 🥰🥰🥰😍😍😍♥️ #babyfever.” Those fans who thought the TLC alum hinted at her own pregnancy might have hit on a real possibility. Of course, with Nicole, it’s not impossible.

Nevertheless more people trolled on her for staying away from May for so long. In her own way, Nicole became the 90 Day Fiance version of Teen Mom 2‘s  Jenelle Evans. It seems like trolling on the young woman became something of a national sport amongst TLC network fans. Undoubtedly, if she is pregnant, she’ll let it out the bag at some stage or another.

My sister just gave birth to her first born baby, Adrianna😍😍😍😍 I am so in love with this little baby! Just gives me so many memories of May when she was just born 🥰🥰🥰😍😍😍♥️ #babyfever

What do you think about Nicole using the #babyfever hashtag on the post about her sister’s baby? Do you think she hinted she might be pregnant? Sound off in the comments below.