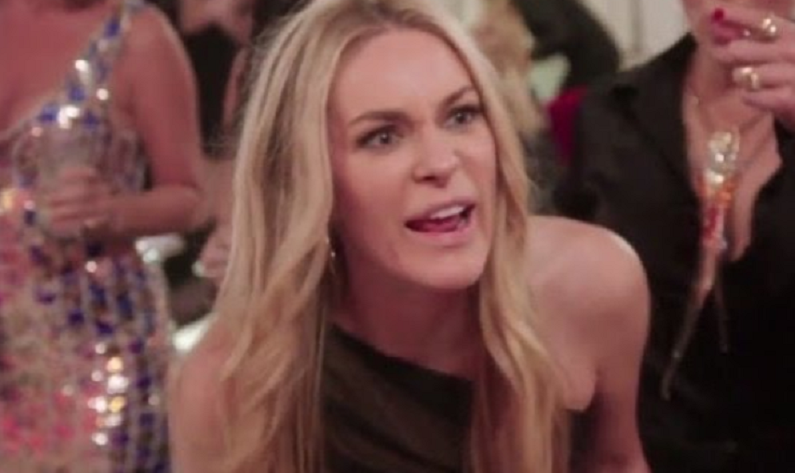 Leah McSweeney is living a sober life these days. However, that wasn’t the case when she appeared on Season 12 of The Real Housewives of New York. Fans have talked about the increased drinking on the show. Most of them feel that the show needs more storylines and less drinking.

Even RHONY star Luann de Lesseps addressed the drinking on the show. She agreed with the fans and admitted that some of her co-stars should dial it down on the drinking. While Luann wouldn’t name names, it was clear who she meant. Most have pointed the finger at Leah, Sonja Morgan, and Dorinda Medley.

The Married to the Mob founder admits she drank a lot while filming the 12th season of The Real Housewives of New York. But that doesn’t mean Leah acts like that in her everyday life. Leah is sober these days. She even admits that her drinking was excessive. In a new interview, she revealed she reflected back at her wild behavior on the show.

In an interview with Entertainment Tonight, Leah addressed her drinking on the show. She revealed that she loves to drink a lot, but she hates being hungover the next morning. It affects her work productivity.

“Honestly, I really just can’t deal with hangovers, can’t do it,” Leah exclaimed, as per The Blast. “I’m obsessed with being productive, to a fault sometimes, and it’s very hard for me to be productive when I’m hungover.”

Leah decided to get sober after filming the Bravo reality series. But there was one thing she liked about drinking with her castmates. She admits that it was a lot of fun to party with them.

Now, she’s looking back at her drunken moments on the show. Most would be embarrassed. But Leah McSweeney admits that she’s proud. But she’s not sure if it’s worth all the drinking she was doing. Even Leah feels that something worse could’ve happened.

“I’m happy that it’s not immortalized and on Season 12 for all to enjoy,” she joked before adding, “but it’s very hard for me to be productive when hungover, and also, nothing bad happened, but I was like, you know what? Something’s bad possibly gonna happen and the stakes are high. It’s not worth it. It’s just not worth it.”

Tonight…yes we are still in Mexico!!! Watch us pick up men, argue, meet a shaman, go to a cenoté, and argue some more! PS We laugh a lot in between 😆 @bravotv 9/8c #RHONY

That’s when Leah made the decision to quit drinking. She’s back to being sober and focusing on her clothing business. When she joined Season 12, she admitted to her co-stars that she was sober. Prior to starring on the show, she would only drink every so often.

Leah McSweeney previously said she wants to see more “diversity” on the show. Not just with race, but also with “age” and “thought.” However, in recent weeks, rumors swirled that her little sister, Sarah, would join the cast. Leah addressed the rumors. She said that she wouldn’t want the reality show to ruin their relationship.

Ok guys, it’s Thursday. Who is even keeping track of days though? Anyway, yes #RHONY is on tonight and I hope it can bring an hour of laugher as we all need that right now! So if you are up for it tune in at 9/8c on @bravotv #SometimesYaJustGottaThrowARavioli

“I don’t know if she would really want to do a full-time apple-holder thing,” Leah said. “I don’t know how she’d feel about that. And then, like, I just can’t help but think about Kim and Kyle [Richards from The Real Housewives of Beverly Hills], and, like, the fights that they had.”

But despite all of that, Leah would love to have her sister on the show. She thinks that Sarah would be a “great” addition to RHONY Season 13.