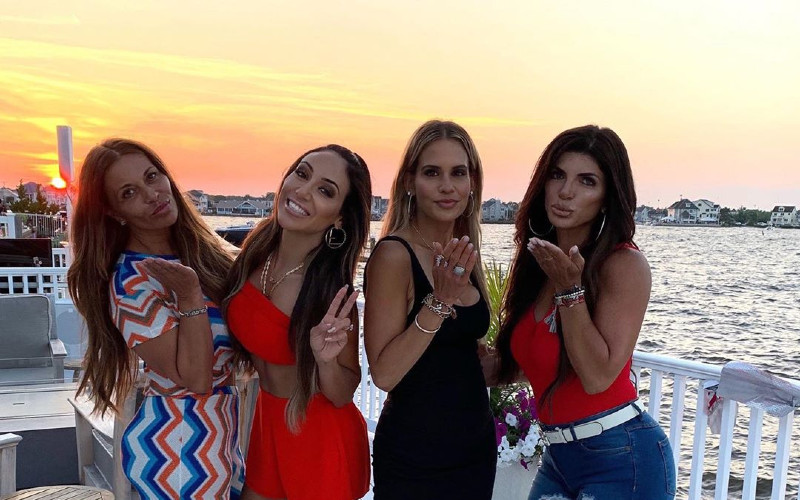 The Real Housewives of New Jersey stars left the Garden State for a trip to Upstate NY. Several of the show’s stars were seen filming while eating dinner at a local hotspot. However, gossip sites quickly picked up on the fact that one star was not in attendance. In fact, it seems there may already be drama between the RHONJ ladies.

Both RHONJ and RHOC recently began filming again. Eagle-eyed fans caught up with RHONJ cameras in Lake George, NY. Located about 4 hours from NYC, Lake George is nestled in the Adirondack Mountains.

The #RHONJ Last Night In Lake George, NY For Their First Cast Trip of Season 11!

It is an increasingly popular vacation destination for residents of the NYC metro and surrounding states.

The fan Instagram account @rhonjobsessed posted several updates on the RHONJ stars during their time in Lake George. In one video, several of the ladies are ordering dinner with several film cameras surrounding them.

The Inquisitr reports that the group is dining at Chateau on the Lake in Bolton Landing, New York.

Lake George isn’t Teresa Giuduce’s first foray upstate. She appeared at the New York State Fair in Syracuse, NY, in 2016. Her daughter, Milania, filmed the video for her debut song, “Can’t Wait to Grow Up” at the Destiny USA mall. The mall, still known as the Carousel Mall to locals, is also in Syracuse.

One Star Missing From Group Dinner

RHONJ stars Teresa Giudice, Melissa Gorga and Dolores Catania are seen at the dinner table. Additionally, Margaret Josephs and her assistant, Lexi Barbuto, round out the group. Lexi having a seat at the table led fans to speculate that she got a promotion to join the cast.

Fans are expecting to see a new face or two after Danielle Staub’s exit from the Bravo show.

However, one RHONJ star’s absence set tongues wagging. Jackie Goldschneider not only missed the dinner, but fans noticed that she stopped following some of her RHONJ co-stars recently. This led to fans wondering if the ladies are already arguing. It’s unclear if Jennifer Aydin was in attendance for the group dinner.

The Instagram fan account also has a photo of some of the group leaving a tiki boat.

The #RHONJ Getting Off A Tiki Boat Today In Lake George, NY! 🎥

What We Know About RHONJ Season 11

Bravo has been very quiet about when new seasons of several Real Housewives franchises will make it to TV. Fans are still waiting for info on the new The Real Housewives of Salt Lake City. Bravo announced the latest spin-off at BravoCon in November of 2019. Reportedly, the first season is complete, but the network isn’t releasing it yet.

As for RHONJ, Season 11 will reportedly focus on Teresa’s post-divorce life. In fact, she may even begin dating during filming the show.

Check back with us for updates for when The Real Housewives of New Jersey will be back on Bravo.

Wait, Why Was Jeremy Vuolo Silenced On TikTok?
TLC: ‘Say Yes To The Dress’ Meets ‘Seeking Sister Wife’ In New Episode?
Did Ariana Madix Change Her Stance On Having Kids?
Kailyn Lowry Reveals What Is Affecting Her Whole Family Now, Even Javi
K-Drama ‘D.P.’ Season 1: Netflix Release Date, What To Expect