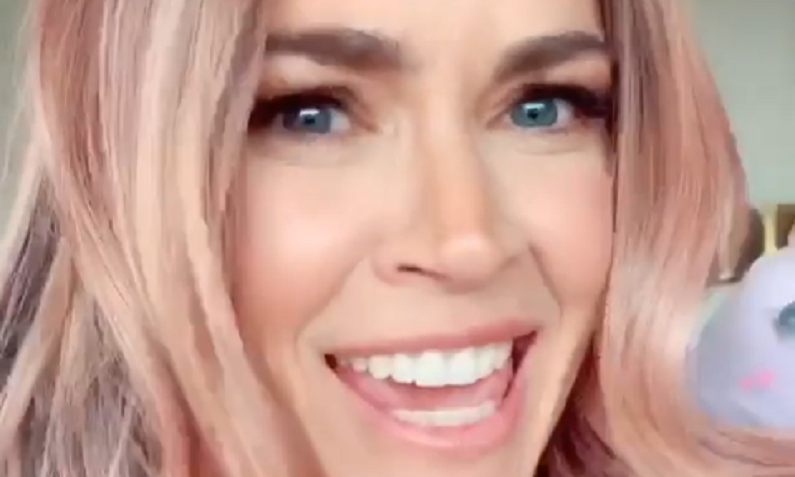 The Real Housewives of Beverly Hills star Teddi Mellencamp made an emotional plea on social media. She revealed that online trolls are taking things too far. She and her family have received death threats since the latest episode.

As fans know, Teddi is the least popular “Housewife” on the series. Viewers aren’t happy with how she handled the Denise Richards and Brandi Glanville drama. While it’s okay to agree with the reality star, it’s clearly not okay to threaten her life.

She had to post a video asking followers to stop cyberbullying her and her family. They’re in fear of their lives because of a few online trolls.

As per Us Weekly, the accountability coach took to Instagram on Thursday, August 12. In the new emotional video, Teddi Mellencamp asked for the cyberbullying to stop. She and her family received death threats. RHOBH fans are taking their hate way too far.

“I had so many comments on my last post saying they wish I was dead, wishing harmful things on my children,” the 39-year-old said in her Instagram video. “That’s really where enough is enough. You guys tune in for drama, then enjoy the drama, but coming after people you do not know and wishing they died has got to stop.”

Teddi is getting death threats in her comments… relax, everybody! • #rhobh #bravotv #realhousewives

Teddi Mellencamp has received plenty of backlash for stirring up drama. But these recent comments are so “wrong on so many levels,” she said before adding, “I have always loved Real Housewives the good, the bad and the ugly because I know it’s an escape for so many people watching.” She watches other Bravo shows in which she enjoys and chooses sides, and she wishes other fans would behave the same way.

The reality star referred to a previous Instagram post, which she posted a screenshot from Wednesday’s episode of RHOBH. She referred to the night’s show as “a good one.” The trolls took to that post to send death threats to Teddi and her family.

During an appearance on Watch What Happens Live with Andy Cohen following Wednesday night’s episode of RHOBH, Kyle Richards and Teddi Mellencamp denied the claims that they’re biphobic. Brandi Glanville previously alleged she had an affair with Denise Richards, which is the main storyline of this season. RHOBH fans called the pair biphobic for the way they reacted to the rumor, which Denise denied.

“People thought you were being anti-bisexual,” host Andy Cohen said before asking one viewer’s question, “Why do you all say, ‘I don’t care what Denise and Brandi do in private,’ and then you’re talking about it constantly and covering your faces and acting shocked?”

Kyle says they wouldn’t have brought it up if it wasn’t already brought up on camera, as per People. She doesn’t care if it’s two women hooking up. The matter is that it’s still an affair, whether it’s with a man or a woman. The 52-year-old reality star felt Denise kept “perpetuating the situation” by claiming she hardly talks to Brandi.

Teddi Mellencamp then added that Denise alleging Brandi hooked up with other “Housewives” didn’t help the matter either.