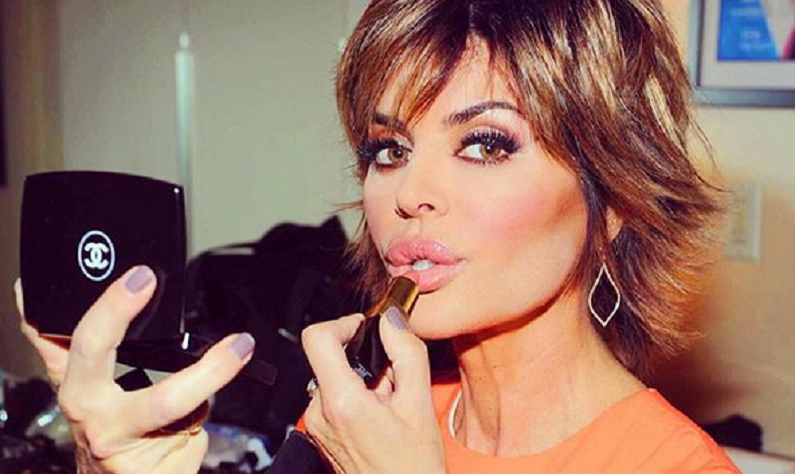 Lisa Rinna of The Real Housewives of Beverly Hills stirred up controversy once again. As fans know, she loves to post videos of herself dancing in her lingerie. Fans often think they’re “cute” and “funny.” But, her latest video didn’t bring the laughs.

On Wednesday, August 12, Rinna posted a video of herself wearing Skims by Kim Kardashian West. In the video, Rinna danced around to the hit song “Gold Digger” by Kanye West. She also cracked a joke about eating disorders that some fans didn’t find funny.

Rinna was hitting back at Garcelle’s comments about her dancing videos. The RHOBH co-star expressed her concern in a previous episode. But Rinna clearly didn’t like it when Garcelle brought up her daughter. And fans also know that you don’t mention Rinna’s husband or her daughter.

The Days of Our Lives actress shared the video on Instagram before deleting it. But, the internet never forgets. The Instagram fan account @bravohaus reposted the video on its feed. Lisa Rinna wrote in the caption, “Caution: Trigger Warning!!! Dancing in my underwear may cause an eating disorder! Proceed with CAUTION HENNY.” She then changed the caption to a series of laughing and crying emojis.

But, her followers still didn’t find the post funny. Rinna ended up deleting the post altogether. Some claim that she went too far. Amelia Gray Hamlin, Rinna’s daughter, announced that she suffers from anorexia. She wrote on her mom’s post with the following comment, “Oh god.” Obviously, she didn’t Rinna’s dancing video funny.

You better believe Lisa Rinna is gonna talk about it. • #RHOBH #RealHousewives #BravoTV

The reality star probably thinks she’s being funny when she posts her videos. But, to some, it looks like she’s mocking a serious health issue. And, it’s something that her daughter suffers from. Fans think that Rinna should be more empathetic when it comes to her daughter’s mental health and body image issues.

On Wednesday night’s episode, Garcelle Beauvais asked Lisa Rinna about her dancing videos. She mentioned how the videos could have an effect on Amelia. But once she mentioned the dancing videos, Rinna got defensive, as per Us Weekly.

“I actually don’t think that is what caused Amelia’s anorexia,” she said. “People are going to judge all of us as mothers.”

Garcelle claims she wasn’t “judging” Rinna. She also disagreed with her. But, Rinna wanted to know why Garcelle would ask such a question. The actress said she’s proud of her daughter for speaking out about her issues.

Garcelle claims she’s “proud” of Rinna’s parenting skills, but Rinna remained quiet. She felt emotional with the onslaught of questions. As TV Shows Ace reported, RHOBH fans slammed Garcelle for bringing up Rinna’s daughter on a previous episode of the Bravo series.

She threw shade at the 57-year-old’s “nearly naked” dancing Instagram videos during the August 5 episode. The 53-year-old Coming to America star said Rinna’s videos could directly affect her daughter.

What are your thoughts on Lisa Rinna poking fun at eating disorders? Do you agree that it’s in bad taste? Sound off below in the comments section.