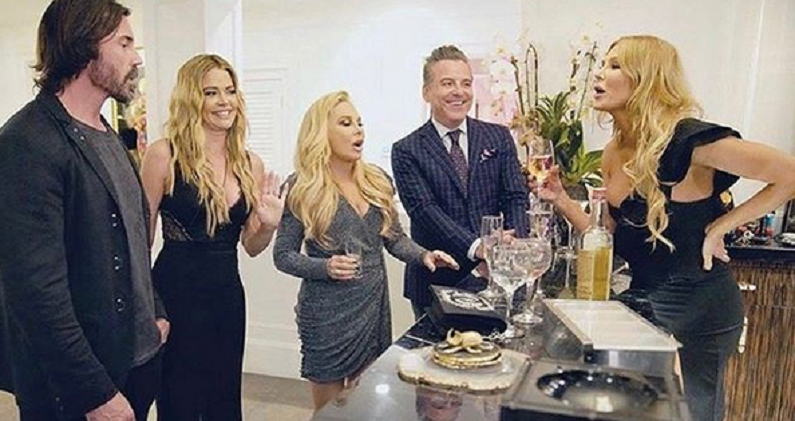 The Real Housewives of Beverly Hills star Brandi Glanville is coming for Denise Richards yet again. She took to her Instagram Stories to call The Bold and the Beautiful star a liar. Meanwhile, fans aren’t buying Lisa Rinna’s tear-eyed scene.

The Days of Our Lives star broke down after Denise confronted her behavior on Wednesday night’s episode. But her tears didn’t fool anyone. RHOBH fans took to Twitter to share their reaction. Most of them didn’t believe that Rinna didn’t really bad for Denise.

Wednesday’s episode started with the RHOBH ladies attacking Denise over Brandi Glanville’s accusations that the two hooked up. Denise fired back and denied the rumors by alleging that Brandi hooked up with other “Housewives,” but she wouldn’t reveal who. Now, Brandi is firing back at her former friend.

The RHOBH co-star took to Instagram to slam Denise Richards. Following last night’s episode, Brandi Glanville claimed that Denise is lying. She also took a shot at her acting abilities.

“Lies, Lies, and more Lies,” Brandi wrote in her Instagram Story. “Some people really aren’t the great actresses they think they are. Wow!”

According to the fan Instagram account @bravohaus, Brandi is calling out Denise. Not only does she think she’s lying, but she also feels that she’s acting around her co-stars. However, most RHOBH fans are still on team Denise.

“Brandi needs to go away,” one follower wrote. “Every time she opens her disgusting mouth lies fall out.”

“Brandi please stop talking about yourself, go away please you are a hot mess,” another user added.

“I love Denise but after seeing her confessional last night where she said she actually said way worse stuff about Teddi than what Brandi had told her, I’m thinking Brandi is telling the truth,” one more user said, before adding, “HOWEVAAA, still love Denise. [SIC]”

The fan was referring to Denise’s at-home confessional. She laughed when she said that she said worse things about Teddi than what Brandi alleged. But during their first night in Italy, she told Teddi that she never said anything bad about her.

Brandi Glanville isn’t the only one who thinks the acting is weak. Wednesday night’s episode started up with a fight between Lisa Rinna and Denise Richards. Rinna yelled her friend of twenty years, saying, “Denise, if you want to be here, you’re here. If you don’t want to be here, then go!”

The next day, the two ladies sat down for a one-on-one conversation when Rinna burst into tears. Denise let her have it. She told Rinna that she feels her friend is always “attacking me” and “interrogating me.”

“I feel like why the f*** did you even invite me here,” Denise exclaimed.

“Because I love you,” Rinna fired back. “Because you’re my friend.

She explained to Denise that she didn’t handle the Brandi Glanville rumors the right way. But that didn’t satisfy Denise.

“Stop attacking me. I had your back,” she sternly said. Then Denise explained to Rinna that time when she defended her with Kyle at her barbeque. But Denise feels that Rinna doesn’t return the favor.

That’s when Rinna realized she’s not a good friend. She told Denise that she doesn’t want to hurt her, but fans aren’t buying. They slammed her on Twitter, claiming that she’s relying on her acting chops.

What are your thoughts? Do you think both Denise Richards and Lisa Rinna were acting on Wednesday night’s episode? Sound off below in the comments section.