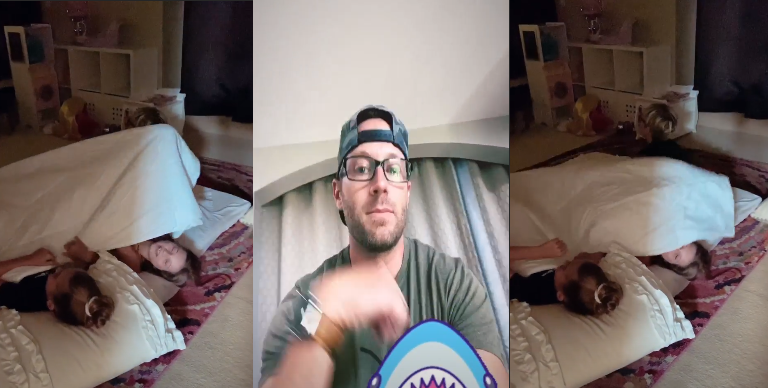 Is Blayke Busby and her cousins McKenzie and Bronson Mills too young to watch the old classic horror film Jaws? Adam Busby of OutDaughtered certainly doesn’t seem to think so.

Adam Busby won’t take the blame for any nightmares.

The OutDaughtered dad revealed on Instagram that the family was enjoying shark week in full swing. In fact, Blayke and her cousins asked Adam if they could watch Jaws. And, it appears as if he allowed them to do so. Adam Busby went on to admit that he “washed his hands” of any blame. So, should any of the three kids have nightmares after watching the movie… It was not his fault.

The movie had barely started when they screamed and buried themselves under the blanket. Adam could be heard in the background dying of laughter as he watched the children struggle to handle the first few minutes of the movie.

Adam then reminds the kids he told them the movie was scary.

Now, Adam did share this on his Instagram Stories… So, it wasn’t something fans could react to. But, that doesn’t stop OutDaughtered fans from wondering… Is Blayke Busby even old enough to watch Jaws?

Unfortunately for fans hoping for an update, Adam Busby did not provide any additional updates on Blayke and her cousins watching the movie. So, we don’t know if they made it through the entire movie. And, we have no idea if Blayke was able to sleep alright that night. Here’s hoping Blayke Busby is able to handle scary movies well as this family spends a lot of time in the ocean.

Watch the video of Adam’s reaction below.

So, do you think Blayke Busby is old enough to watch Jaws? How old were you when you watched Jaws for the first time? Tell us about it in the comments!

And, stick with us at Tv Shows Ace for the latest OutDaughtered news!