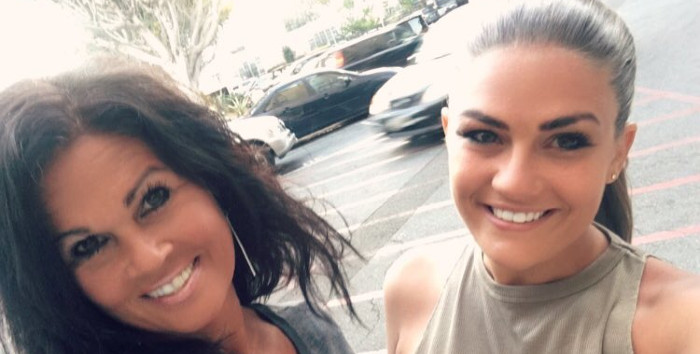 It’s been two months since Vanderpump Rules star Brittany Cartwright flew home to Kentucky to be at her mom’s side. Sherri Cartwright landed in the ICU after a routine bladder surgery went wrong.

Now Brittany is speaking out at the ‘horrible’ experience. She credits husband Jax Taylor for his being “amazing” throughout the scary time.

Brittany Cartwright Details What Happened to Her Mom

While media outlets quickly shared that Brittany’s mom was in the ICU, other details were scarce. In a new Instagram post, the Pump Rules star informs fans of exactly what happened to her mother.

Brittany writes that her mom had surgery on her bladder and was “sent home” a few days later. It was there that her mom started feeling bad and went to the ER. Sherri needed another surgery to fix the damage from the first.

The Kentucky native reveals for the first time that the doctors nicked her mom’s bowels in the first surgery. They didn’t notice and her mom “had gone septic.” The Pump Rules star credits the “amazing” ER doctors in saving her mom’s life. In fact, her mom was on life support for several days and it was touch-and-go, per People.

Luckily, her mom pulled through. Brittany rushed to Kentucky immediately, with Jax following shortly. Once her mom was out of the hospital, the couple stayed for two months to help with the recovery. Last week, Brittany and Jax made the road trip home to California with their two dogs. Sherri expressed her gratitude to her daughter and son-in-law in a touching Instagram post earlier this week.

I can’t begin to even thank these two enough for all the help during my recovery. I love you both so much. I pray for safe travels back to LA ❤️😘🙏🏻

Brittany Thanks Fans For Prayers

When the news broke that Brittany’s mom was in the ICU, fans and co-stars rallied behind the Pump Rules star. Despite a rocky Season 8, she is still a favorite among fans. After Stassi Schroeder and Kristen Doute were fired in June, fans called for Jax and Brittany to go next. Then Brittany’s mom ended up in the ER and the outcry about their alleged homophobia died down.

In a long Instagram post, the Pump Rules star wrote a “thank you” to “everyone who has prayed and sent best wishes” to her mom. Co-star Kristen Doute got flak on Twitter for breaking her social media silence to ask for prayers for Sherri.

Brittany writes that her mom is “doing so so much better” now.

I just want to say thank you to everyone who has prayed and sent best wishes for my wonderful Mom. ❤️ She has made an amazing recovery and is doing so so much better. For those of you who don’t know her story, she went in for a bladder surgery, stayed a couple nights in the hospital and was sent home. She was feeling horrible and days later she was rushed to the hospital for emergency surgery. Her 45 minute surgery turned into 4 1/2 hours. It was the scariest moments and a horrible time to be so far away in California. We found out after that they had tore her bowel during her bladder surgery, they didn’t notice and she had gone septic. The emergency doctors were amazing and they literally saved her life. She fought on life support for a couple days and woke up days later with no idea what had happened to her. I flew straight to Kentucky and stayed by her side. She is so strong and has come so far from the first days I stayed with her in the hospital. This was a very scary time but she is bouncing right back!! Please keep her in your prayers as she continues to heal for her next surgery. Also my hubby @mrjaxtaylor was amazing during this time, he came right to KY and helped us through everything. I love you honey! Hug the ones you love and hold them tight! You never know what could happen. I am very thankful right now. 🥰❤️

When Jax and Brittany got back to L.A., Brittany cooked up a feast for a few of her Pump Rules co-stars. Kristen Doute and Beau Clark both posted videos of the dinner Brittany cooked for them. It’s safe to assume that Stassi Schroeder was also in attendance. Kristen and Beau both dubbed the meal as “fam dinner” on their Instagram Stories posts.

Brittany also gave fans a peek at the huge meal she cooked for her co-star “fam.”

Bravo has yet to announce if Vanderpump Rules will return for another season. Fans are skeptical of how it would work without Stassi and Kristen. We will give fans updates as soon as Bravo makes an announcement either way.