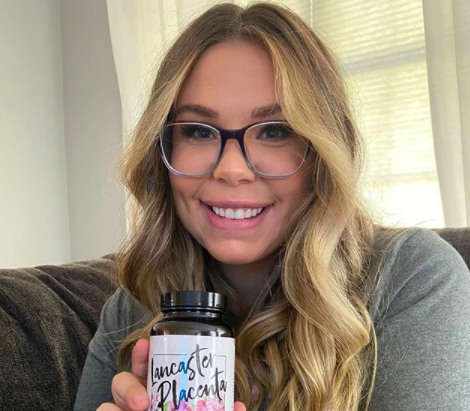 Teen Mom 2′s Kailyn Lowry has finally revealed her new baby’s name. But now just a few days later she is getting teased by fans as they try to discover why her son is named Creed.

Why did Kailyn name her baby Creed?

Kailyn first revealed her son’s name on Monday, August 10. She posted the following photo of her son featuring his new baby blanket. However, fans could not resist commenting jokes about how she came up with Creed. The comments became so much that Kailyn replied to set things straight.

• C R E E D • guiding principle Thanks @shophighway3 for our name blanket! Y’all can order one for yourselves using code: KAIL20 for 20% off 💕

According to InTouch Weekly, one fan asked,“His name is Creed?? Like the band??” A second commenter asked if she named her son after Creed from The Office.

Kailyn went on to clarify that Creed is actually a reference to the Michael B. Jordan movie in which the actor plays the son of Apollo Creed from the Rocky movies. But, some fans were still not satisfied with this answer. One even commented saying, “Why would she name a baby after a movie CREED.”

However, many supporters of Kailyn did not have anything negative to say. The positive comments most definitely outweighed the haters. Many fans were sure to compliment her cute baby, praise her for looking amazing, and even stick up for her choice of the name Creed.

One fan commented, “he is so adorable and I love his name 💙 .” Another one said, “Kail your beautiful after that baby he is gorgeous baby to congratulations.”

Finally, one fan could no longer stand the hate herself and asked Kailyn how you turn off the comments? She said, “how do you mute these comments..I really don’t know how you deal with this..some of these folks are just rude and nasty for no reason.”

It’s good to see the new mom getting so much support after having baby no. 4!

Baby No. 4 was risky for the Teen Mom 2 star

Kailyn has had three children prior to this pregnancy with no issues. However, Kailyn previously revealed on her podcast that her pregnancy with Creed was high-risk. The reason being that she is at her heaviest weight. Thankfully, that did not mean she was guaranteed to have complications. There was just a greater risk for complications for her and the baby than ever before.

Luckily it appears she was able to give birth to her son with no issues. She and the baby are both happy and healthy. Some may even say Kailyn appears to be thriving postpartum as the Teen Mom 2 star showed off her placenta smoothie earlier this month.

What do you think of Kailyn’s son’s new name? Where would you guess she got the name Creed from? Let us know what you think in the comments below. Be sure to watch new episodes of Teen Mom 2 on MTV.

Matt Roloff Snubs Nearly ALL His Children, Is Zach His Favorite?!
‘Sister Wives’ Fans Have A BIG Question For Meri Brown: Too Personal?
Todd Chrisley ‘Not Afraid Of Lawsuits’ Amid Being Sued For Slander
Jinger Vuolo Shares Rare Photos Of Felicity, Celebrates Third Birthday
Savannah Chrisley Under Fire For Catching A Shark: Did She Release It?