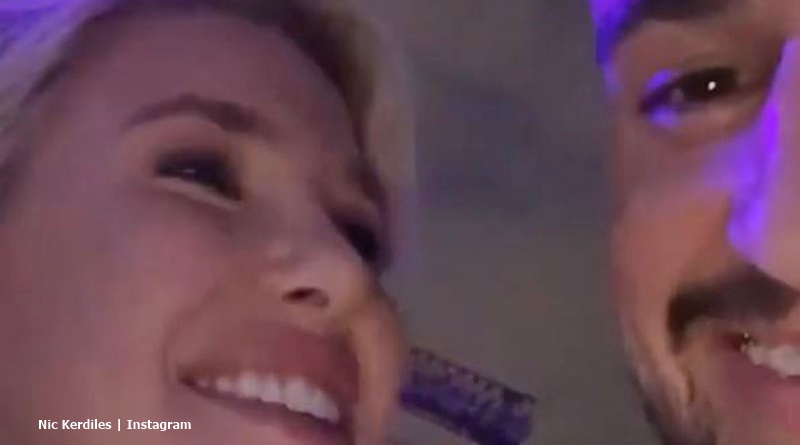 Savannah Chrisley and Nic Kerdiles apparently broke up. Fans on social media seem a bit confused about it, as they postponed their wedding twice. And, fans saw them break the news to Todd Chrisley on Chrisley Knows Best. But, it seems they still hang out with each other, according to a post by Todd over the weekend. And, Nic shared his love for her publicly on her 23rd birthday.

On his Instagram, Nic shared a video of himself with Savannah. They kissed and looked very much in love. His caption read, “Happy 23rd Birthday to the woman that has changed my life.” Next, he said, “I continue to thank God everyday for having put you in my life. Your smile, your heart, your strength, your ambition and your overall love is unmatched!” Possibly, it’s an older video. Nic wrote, “These moments are the ones that I hold onto most. So proud of the woman you have become and continue to be. Love ya kid!”

Some fans started speculating that they heard Nic and Savannah Chrisley broke up. One said, “Doesn’t sound like a ‘lovers’ statement to me. Almost like a great friend. 🤷🏼‍♀️I think they make a cute couple though! Who knows what the future holds!”

Others suggested they actually broke up for good. But we reported that Todd possibly feels differently. In a post about water skiing on the weekend, he tagged both Chase and Nic as being with him. And he joked about both of them being like his own kids.

Just skiing my way through life ..

Nic and Savannah still figure things out between themselves

The situation between Nic and Savannah seems a bit complicated. Clearly, they still love each other. And, US Weekly noted that they called off the wedding for other reasons, not about infidelity. He never cheated on her or anything like that. The outlet cited Savannah as saying, “when two people love each other and nothing bad has happened, it’s not so clear cut. It’s ‘We’re figuring it out.”

On Todd’s Chrisley Confessions, Savannah said, “We made [the choice] together. We both realized that things moved way too fast and we needed to go back to dating.” She added, “I just knew we had to work on things on a different level.” And, as Savannah Chrisley points out, “It’s 2020 and you know what, it’s okay not to follow the guidelines and the whole timeframe that everyone follows.”

Happy 23rd Birthday to the woman that has changed my life. I continue to thank God everyday for having put you in my life. Your smile, your heart, your strength, your ambition and your overall love is unmatched! These moments are the ones that I hold onto most. So proud of the woman you have become and continue to be. Love ya kid! @savannahchrisley

Fans of Chrisley Knows Best know that Todd’s super-protective of his kids. Some people accuse him of being too controlling. So, if Nic hurt Savannah Chrisley and did something wrong to her, it’s unlikely they’d spend time on the water enjoying some family fun with him. Do you agree? Sound off in the comments below.