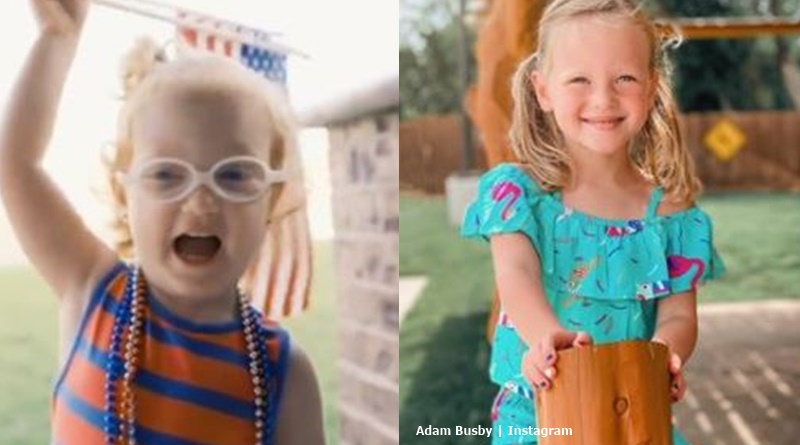 OutDaughtered fans love to see how Parker Kate blooms into a beautiful personality. Bear in mind, not that long ago, she always looked so unhappy and suffered from anxiety. But the quint comes out of her shyness more and more these days. Each quint comes with a different personality, something Adam and Danielle Busby have been careful to nurture. Hazel’s a cutie but not beyond sneaky. And, she burst Parker’s bubble on Tuesday.

We reported that Parker suffered from anxiety, and Adam and Danielle took her to see an occupational therapist. Her anxiety seemed painful, even for fans to see. With the help of Adam, she slowly improved and looks very much better these days. In fact, while Parker might be a”daddy’s girl,” it melted Danielle’s heart when she called her mom her best friend. We reported that Danielle said on Instagram, “For a split second my PK told me she was 👉🏻MY 👈🏻 best friend …warmed my heart so much 💕…even if she followed it up with a “daddy too” …it still stole my heart!”

OutDaughtered fans know that the other quints never made special exceptions for Parker. Actually, kids can be brutal sometimes. Riley especially comes over a bit of a “boss.” In fact, a few years ago, TLC aired a segment that showed Riley not afraid to get super-bossy and almost bully her siblings. And, to this day, Adam tags her as “boss baby.” But, it seems that Hazel’s not going to tiptoe around her sister Parker, even when she takes pride in her own achievements.

Adam illustrated the fact that Parker takes pride in her achievements. And, that Hazel’s more than capable of taking her down. He shared a photo of Parker in the bath. The TLC star captioned it with, “Parker’s favorite thing during bath time is making big bubbles with her hands.” He added, ” She gets a little over-eager and[drains] a soap container if we aren’t paying attention though.” Her dad noted her pride when she makes a huge bubble.

The OutDaughtered dad hoped for a photo of her achievement. But, he wrote, “Hazel popped it” before he snapped “a picture for her.” One follower noted, “Hazel!!! Bubble burster.” A few others out up sad faces for Parker’s burst bubble. One said, “Awww!” Nevertheless, she made another one, not so big, and he photographed that.

Parker’s favorite thing during bath time is making big bubbles with her hands. She gets a little over eager and will drain a soap container if we aren’t paying attention though… She is always so proud of herself when she get a big one. Unfortunately the one right before this photo was about twice as big, but Hazel popped it before i could get a picture for her. #parkerkate #itsabuzzworld #outdaughtered

Obviously, she got her confidence back in large doses. Plenty of OutDaughtered fans recalled themselves at that age, enjoying playing with soap and bubbles. One fan commented about bubbles being “the best.”

What did you think about Hazel bursting Parker Kate’s bubble? Sound off in the comments below.