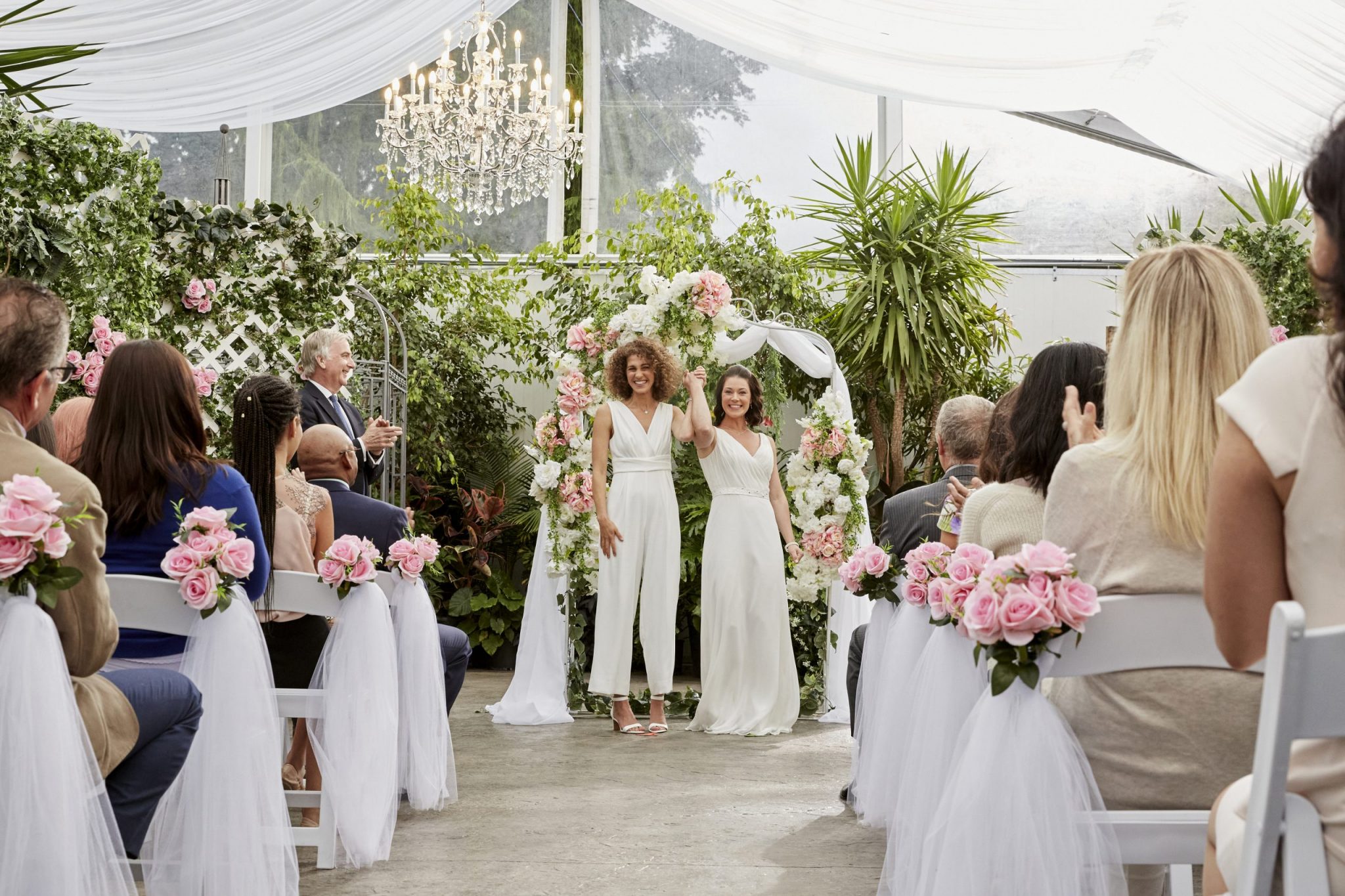 Hallmark’s Summer Nights movie premiere of Wedding Every Weekend is a sort of double premiere. This will be the first time that the network will include a same-gender wedding. What do we know about this groundbreaking movie?

Hallmark is premiering the third of their Summer Nights Movies, with Wedding Every Weekend on Saturday, August 15. During this time of Covid-19, fans are quite happy to see some new movies airing. But this is a special movie.

Wedding Every Weekend is the first Hallmark movie to feature a lesbian couple getting married. This is the first movie on the network that features a same-sex couple tying the knot.

Hallmark promised that in 2020, they would have more diversity and be more inclusive. It’s happening because the network had a huge faux-pas that got everyone talking about them. Unfortunately, part of that talk included #BoycottHallmark.

Tune in to an all-new premiere! Amanda (Carmel Amit) and Vicky (Makayla Moore) celebrate their special day in one of the…

This all began during Christmas 2019. The network aired a Zola ad. This is a wedding planning service. There was a cornucopia of commercials from the wedding party service. One included two women who just married each other, and kissing.

One Million Moms petitioned Hallmark to remove the commercial. They did. That is when the protests happened. All over social media, people called out Hallmark’s lack of diversity and included #BoycottHallmark.

Within a day, parent company Crown Media reversed that decision. They also apologized for making the wrong decision. During this time, the network promised that they would reach out to GLAAD. They promised to be more diverse and more inclusive.

This is a major step in that direction. But, not everyone is happy.

One Million Moms, has now called a boycott of Hallmark. Moreover, this organization which is a division of the Christian-right American Family Association, has already had about 61,000 signatures running up to the August 15 premiere of Wedding Every Weekend.

They already started a petition in late July when Hallmark announced that they were considering LGBTQ storylines for an upcoming Countdown to Christmas movie. There will again be 40 new movies for 2020.

In the new petition, One Million Moms refers to the new Summer Nights movie premiere. They shared the basic synopsis of Wedding Every Weekend, but admit that Hallmark has not said anything about the same-gender wedding.

The One Million Mom’s petition acknowledges that per the Hallmark trailer, the new movie will include one lesbian wedding. This will be one of the four weddings that Nate (Paul Campbell) and Brooke (Kimberly Sustad) attend.

In the story, the couple realize they are going to the same four weddings in a row. They decide to become wedding buddies in order to deal with the challenging time of being single at a wedding.

The petition accuses Hallmark of “catering to the Left.” Consequently, the group wrote that they feel “betrayed” by the network. They feel dismay the netword did “a one-eighty from the wholesome content they once had.”

We are proud of our movie, Wedding Every Weekend. Our priority at Hallmark Channel is to develop a broad mix of content, characters and stories in order to create a Hallmark experience where everyone feels welcome.

Consequently, Hallmark has has made a statement on Twitter. This was in response to a negative tweet aimed at them and at the two stars of the movie, Paul Campbell and Kimberley Sustad.

“We are proud of our movie, Wedding Every Weekend. Our priority at Hallmark Channel is to develop a broad mix of content, characters and stories in order to create a Hallmark experience where everyone feels welcome.”