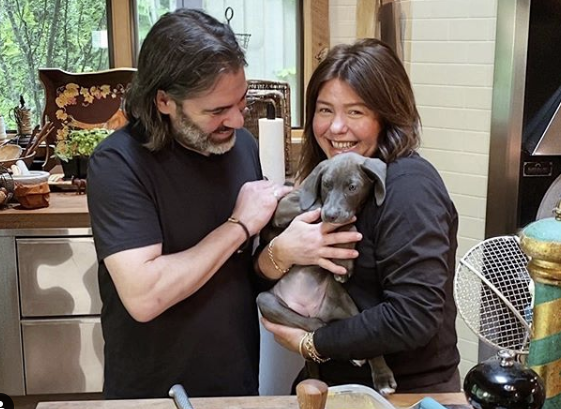 We’re glad everyone is okay! Celebrity chef Rachael Ray, her husband John Cusimano, and their dog Bella, are all reportedly safe following a housefire at their New York residence.

The Damage to Rachael Ray’s Home is Unknown, But the Flames Were Quite High

One of Rachael’s representatives spoke to Entertainment Tonight to provide an update.

According to the source, the home is “unfortunately damaged and we don’t yet know to what extent.” The Warren County Sheriff’s Office confirmed the home belongs to Rachael Ray and her family. CBS6Albany has a video of the blaze. In the video, you can see flames engulfing the roof.

The Post-Star reports a call for emergency services came at 7:27 PM eastern time last night. Firefighters were still at the scene until at least 11 PM that night. Fortunately, there were no injuries to report.

Our hearts go out to Rachael Ray and her family. The loss is tragic, but we are relieved they safely escaped. Rachael addressed the tragedy on Twitter and thanked fans for their love and support.

Thank you to our local first responders for being kind and gracious and saving what they could of our home. Grateful that my mom, my husband, my dog… we’re all okay. These are the days we all have to be grateful for what we have, not what we’ve lost.

While the pandemic raged in the spring, Rachael Ray filmed her show in her home. New York City halted all television production early on. The show is on break for the time being, so viewers will not notice an interruption to the show quite yet.

Rachael’s show isn’t the only one to be affected by the pandemic. Other talk show hosts such as Ellen DeGeneres and Kelly Clarkson are filming from home these days. Even competition shows such as The Voice switched to a virtual format amid the pandemic. Hopefully, Rachael can film from the studio when it’s time for her show to come back for the new season.

This is the second major loss for Rachael and her family this year. In May, their dog, Isaboo, passed away. She posted a touching tribute to her beloved pet on Instagram. Rachael said they intended on adopting another pet soon because they knew it was what Isaboo would want. John and Rachael adopted Bella a few weeks later.

Our beloved Isaboo passed today in her backyard in the sun in the Adirondack Mountains in New York. In our arms. Peacefully. ⁣ To my fellow Americans, we’ve lost more than 90,000 human lives and over 300,000 of our global citizens. We all feel disconnected and so many are suffering right now. ⁣ And today @johnmcusimano and I mourn the loss of a dog; a pitbull who taught us more about unconditional love, empathy, and understanding of one another than we could have ever imagined. ⁣ If you have room in your heart, your home, and your budget, I say from experience that bringing an animal in need into your home can help you become a better human being. #northshoreanimalleague @animalleague ⁣ We will open our home and our hearts to another animal in need, because that is what Izzy would want. ⁣ We’ll miss her sense of humor. Her Wile E Coyote-ness. Her energy and her game-on attitude. She was a fighter. ⁣ In the weeks to come you may even spot her as she was our only audience for the shows we’ve been producing from our home during this strange time. We just felt it right to share that this was the day she left this world and we hope we see her in the next. ⁣ Our life will be a little less sweet without our Isaboo.

Happy Adoption Day to Bella Boo Blue 💙 who we welcome to our family today! She loves how we roll! (…in the outdoor carpeting 😂) Look at those baby BLUES🤩 😍

In spite of the tragedy, we’re touched to see the community rally around Rachael Ray and her family. In a world with so much negativity, instances like these give us a glimpse at humanity. Remember to check back with us. We’ll fill you in as soon as we know more. In the meantime, why not send Rachael and her family some well wishes on social media? They could definitely use your support right now.

For more stories like these, be sure to regularly follow TV Shows Ace. Stay tuned for more television and celebrity news. We’re happy to keep you informed.