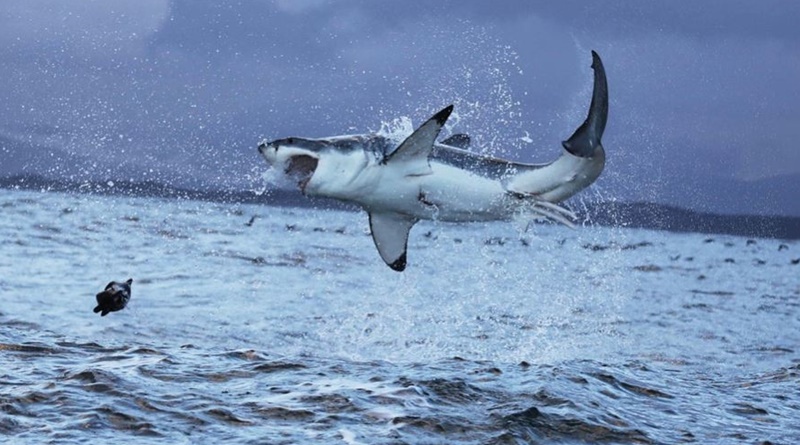 OutDaughtered fans saw that Blayke and her little sisters, the Busby quints settled down to watch the footage available for Shark Week. Air Jaws first came to Discovery Channel back in 2001. And, it brings close up visuals of massive sharks, mainly great whites, breaching in spectacular fashion.  In celebration of Shark Week, they aired Air Jaws: Ultimate Breach. And, the quints were there for it! It seems the Busby’s raise a brave bunch of little girls.

Clearly, TLC’s Busby quints never watched Jaws. Those kids who tried watching the original 1975 movie probably got traumatized for life. Jaws 2 in 1978 seemed just as scary for teens. But back then, sharks got a lot of bad coverage. Few people cared for them at all. In fact, back in the olden days, the only good shark seemed to be a dead shark. That was until South Africa became the first country in the world to offer them protection in 1991.

These days, conservation and preservation of the magnificent animals take stop priority in many places. The USA also started protecting great white sharks in 1997. Recently, Shark Week became an annual treat for people who love nature. And, it seems the OutDaughtered family enjoys finding out more about them.

On his It’s A Buzz World Instagram account, Adam shared about their excitement. He showed a photo of them all sitting in front of their massive TV watching the Air Jaws show.

The kids all wore tee-shirts with sharks on the back. Fans loved that and wanted to buy some for themselves. Other fans seemed blown away by the size of the television. It literally stretches from wall to wall. And one fan commented, “Who needs a movie theater?” But, like the quints, most of them also seem excited about Air Jaws. Adam captioned his photo with, “You know who LOVES #SHARKWEEK ? ❗️THE BUSBYS ❗️Snacks, shark week tee, and Air Jaws! We are so excited!”

One fan who takes it to the next level said, “Best week on TV! 💙🦈 Except when a new season of OutDaughtered premieres! 😉💛🎉.” Another fan noted, “I love shark week! I’ve been a fan since I was the quints age (and that’s been just a day or two 😉).” Another fan also noted that they actually pay “Sling every month” just for the chance to watch Shark Week.

You know who LOVES #SHARKWEEK ? ❗️THE BUSBYS ❗️Snacks, shark week tee, and Air Jaws! We are so excited! #itsabuzzworld #discovery

Some fans agree that the quints seem rather brave watching the giant animals hunting their prey. But, they love that they learn about conservation of them as well.

Are you watching Shark Week? Do you agree those Busby quints sound like a brave bunch of kids? Sound off in the comments below.