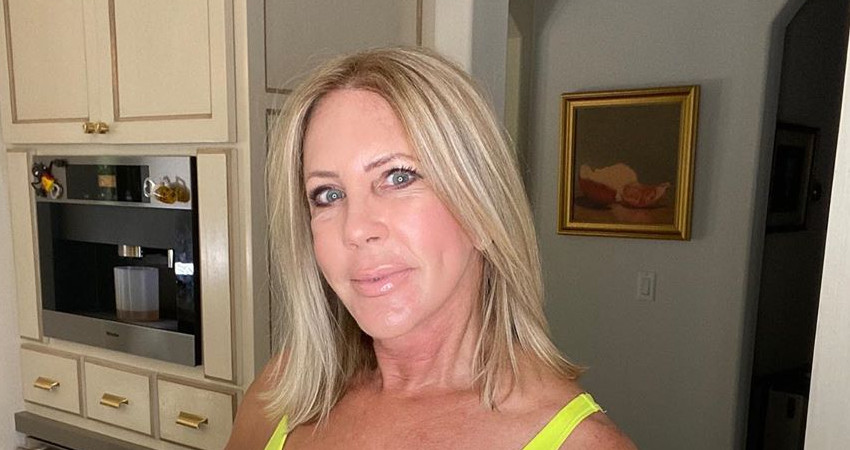 Over the weekend, The Real Housewives of Orange County star Vicki Gunvalson shared some big news with fans. No, she’s not married… yet. She revealed that she’s ‘moving on’ from Orange County after 26 years.

Reality fans were shocked in January when Vicki announced her departure from RHOC. Vicki was the last remaining original cast member. As Bravo fans know, the Orange County show launched a franchise with several spin-offs.

However, Vicki reportedly wasn’t asked back full-time. Rather, she was offered a ‘friend of’ role similar to her role in Season 14. She promptly turned it down. Her friend and co-star Tamra Judge also left, but may return for Season 16.

Alternately, the dynamic duo tease their own reality show on another network.

Regardless, Vicki is out with the OC. She tells Celeb Magazine exclusively that her 5000-square-foot home is going on the market this week. As Bravoholics know, Vicki recently purchased a home in Puerto Vallarta. The home serves as a vacation home, for now. The RHOC star hopes to retire to Mexico in the future.

Vicki says the OC house will go on the market for $3.35 million dollars.

Where Will Vicki Gunvalson and Her Fiance Live?

The RHOC star has a few more years left before retirement. In the meantime, where will she and her fiance, Steve Lodge live? Vicki tells Celeb Magazine that the couple will split their time between California, Puerto Vallarta and North Carolina. Steve has family in California, so Vicki says they will “always maintain” a home in the area.

However, due to her children being grown with families of their own, she feels it is time to downsize. Vicki’s daughter, Briana, lives in North Carolina with her husband, Ryan Culbertson. The couple are expecting their third child later this year.

Vicki is considering buying a home in North Carolina to be close to her grandchildren. The RHOC star’s son, Michael, lives in San Diego. Even more reason for her to keep a home in California.

Wherever she lands, Vicki plans to continue her Whoop It Up With Vicki! podcast. She is also working on a radio show about, “women, money and retirement planning.” She reveals that both ventures can be done remotely from anywhere.

Vicki Shades Former RHOC Co-Stars: ‘I’m Not Friends’ With Any of Them

The RHOC alum doesn’t see a future return to the Bravo show. However, she is open to returning to reality tv with a show featuring Tamra. Aside from Tamra, she is “not friends with any of the women currently on the show.”

Furthermore, Vicki trashes her former co-stars’ “class level,” saying it doesn’t “fit” in her life. Braunwyn Windham-Burke may be pleased to know that, according to Vicki, “the torch has been officially passed on.”

As fans know, Vicki was less than welcoming during Season 14, Braunwyn’s first. In fact, Vicki told her at the reunion to “get off my show.”

However, Bravo did bring Braunwyn back for Season 15.

Season 15 of The Real Housewives of Orange County is currently filming. It will debut on Bravo later this year. Check back with us for updates on Vicki and all your favorite Housewives.