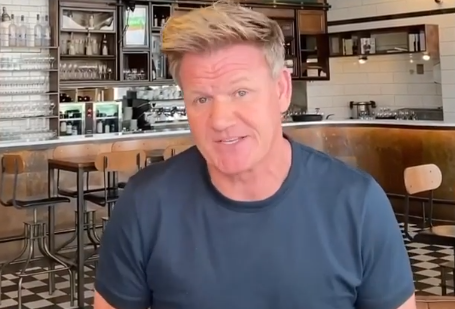 If you love celebrity chef Gordon Ramsay, you know he can be quite a tough critic. Chef Ramsay has a reputation for being harsh with adults, but gentle with children. However, apparently not even his own kids are safe from his culinary criticisms.

Chef Ramsay’s 20 year-old daughter, Holly, recently made a cooking video. He posted a response video on TikTok playfully poking fun at her as she went. We really think you should take a look.

In the video, Holly begins cooking potato gnocchi, one of Chef Ramsay’s best recipes. She starts by adding a dash of salt to a pot of water containing potatoes. However, a few of them weren’t peeled properly.

“What are you doing young lady?” Gordon Ramsay demands in his TikTok video. “Peel the potatoes, c’mon. Really?”

The dialogue gets funnier as the video continues.

“Young lady, you should know better,” Chef Ramsay scolds his daughter as she tops her dish with a garnish. “Shame on you, Holly!”

Gordon Ramsay famously critiques cooking videos and pictures that fans send him. If you send him one, don’t expect him to say anything nice.

If you don’t already follow Gordon Ramsay on social media, you definitely should. He’s always posting mouth-watering pictures and videos of his wonderful creations.

This isn’t the first time we reported on Chef Ramsay’s TikTok antics. Earlier this summer, he made another video with another one of his children, Tilly. Tilly sends her father some song lyrics and asks him to sing them back without any context. The results are hysterical.

The Celebrity Chef Has Plenty of Televisions Shows Worth Watching

If you haven’t seen Gordon Ramsay: Uncharted yet, you really need to see it. It’s kept many of us entertained during the quarantine. In the show, Chef Ramsay travels the world and learns about different cuisines and cultures. We have plenty of articles for you to browse through about the show. In one episode this season, Chef Ramsay travels to Guyana in South America. We really enjoyed this episode, but we aren’t sure if we would ever want to know what a tarantula tastes like. You can catch up with the series on Hulu.

There’s no word on when we can expect new episodes of Hell’s Kitchen or MasterChef. We have no doubt the Coronavirus pandemic put a dent in production plans. For now, we will just have to patiently wait for any official word from Fox. The network hasn’t cancelled the shows, so we may know more in a few months. But for the time being, you can enjoy watching Chef Ramsay goof around on his various social media accounts.

Stay tuned! We love bringing you the latest celebrity and television news. Follow us on social media for more updates.