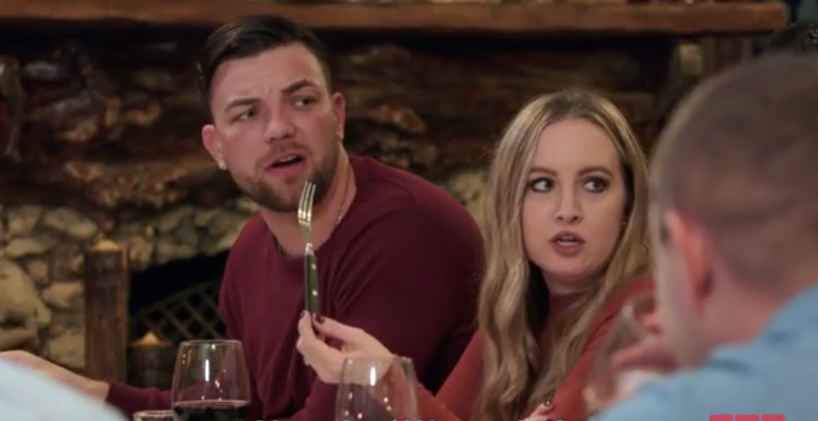 A big family dinner almost turns into an all-out brawl between 90 Day Fiance star Andrei Castravet and Elizabeth’s brother Charlie Potthast. It happens on the episode of Sunday, August 9, and Elizabeth is saying Andrei is the one at fault. She does, however, also blame her brother.

Tensions finally reach boiling point during Sunday’s episode of 90 Day Fiance. Elizabeth and Andrei are having dinner with their respective families in Moldova. What should be an enjoyable meal erupts into chaos. This is when Andrei threatens to fight Elizabeth’s brother, Charlie.

Elizabeth’s family has only recently arrived in Moldova and naturally want to know more about Andrei’s family. They are all seated in the restaurant when Elizabeth’s brother Charlie and her dad, Chuck, start to ask questions about Andrei. They want to know from friends and family what he is all about.

Taking it outside! Andrei has had enough of Charlie's disrespect. #90DayFiance

Andrei doesn’t like this one bit and gets upset about Charlie and Chuck investigating him. This leads to Andrei inviting Charlie to “Shut the f**k up, you’re gonna take it outside now.” Charlie welcomes the idea, standing up and both men get into each other’s faces. Both 90 Day Fiance stars are doing the alpha male thing, taunting each other until Andrei’s friends break them up.

Charlie and Andrei continue the fight

As Andrei is held back from the fight, Charlie pipes up, saying that in America, they do and say “what the f**k” they want. This leads to Andrei standing again, wanting to take the fight outside. Andrei and Charlie are openly swearing and cursing at each other.

Both men do, eventually cool down and return to the table. However, Elizabeth is obviously still shaken from the experience. In her confessional, the TLC reality star says all she heard was “f**k you” and “No, f**k you,” before the men got up to fight. She says she doesn’t know what is going on but both Andrei and Charlie are at fault right now. Elizabeth says this is no way to behave and it is not OK.

Andrei’s sister-in-law tried to calm the flames but Charlie was still upset. This is because Andrei threatens to fight him after he and his father have traveled to Moldova to attend their second wedding. Andrei goes on to tell Charlie to go back to America, while his sister tells him to respect his in-laws.

Andrei’s brother, Radu Castravet, also tries to calm things down. He believes that things escalated so quickly because both Andrei and Charlie were drinking alcohol. However, Elizabeth tells her brother the reason he doesn’t get on with her husband is that they are so alike. Both 90 Day Fiance stars are “hot-headed.”

As friends and family try to calm the situation, Andrei asks Elizabeth to tell her brother to get out of there now. For his part, Charlie calls Andrei an “asshole.” His friends asked him to stop provoking Elizabeth’s husband. Elizabeth criticizes Andrei for treating her family so badly and she wants them to leave the restaurant.

The action continues outside as Andrei and Elizabeth argue while waiting for the car. She calls his behavior at dinner “embarrassing.” This leads to Andrei trying to head back into the restaurant. Arguments erupt again all around, but eventually, Andrei and Elizabeth do leave, still fighting along the way.

No second wedding for 90 Day Fiance stars Elizabeth and Andrei?

Andrei is upset, saying Elizabeth should have taken his side in the fight with him and Charlie. In her confessional, Elizabeth says she is upset that her husband was doing this. She says her family is there especially for her and Andrei, but he doesn’t seem to want them there. As noted by In Touch, Elizabeth continues, saying if that is the case, she is leaving. She is not doing it and is not getting married again.