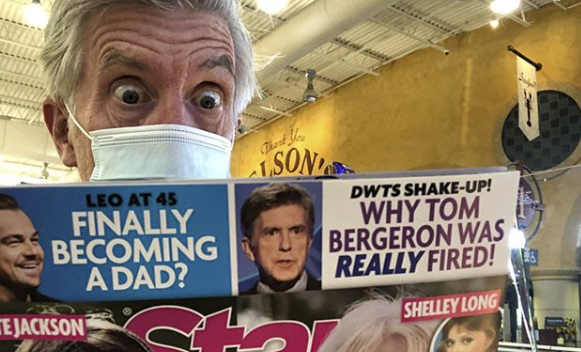 Tom Bergeron handled his dismissal from Dancing With The Stars quite gracefully. We will all really miss him, and I think we can all honestly say we respect him so much for his tact. The former DWTS host seems to be in great spirits these days and is participating in a new social media challenge.

Reese Witherspoon started the “2020 Covid Calendar” trend. You’ve probably seen a few people post their own on social media. The user makes a little calendar, using photos of themselves making faces that range from mildly stressed out to wildly horrified. Take a look at Tom’s and you’ll see what we mean. Popculture recently reported on it.

Tom Bergeron seems to be pretty happy in January, and you can see how things slowly go downhill from there. We’re not quite sure what’s going on with his last post, but we’re amused. Maybe Halloween will come earlier this year?

“You are hysterical Tom! It sucks that you won’t be a part of my once favorite show😢” wrote one Instagram user.

“July is a vibe,” wrote another. We definitely agree. July is most certainly a vibe.

Which month from the Tom Bergeron Covid Calendar is your favorite? Let us know in the comments.

No matter what, Tom Bergeron always seems to be full of fun. He also recently posted a photo on his Instagram of himself reading a tabloid. One of the headlines reads, “Why Tom Bergeron was really fired!” We’re really curious to know what it said! Tom said on Twitter that he was very thankful for the time he spent on Dancing With The Stars. It really seems like he bears no ill will towards anyone involved with the decision.

One thing is for certain. Our Monday nights will never be the same. We fully plan to give Tyra Banks a chance, but we really will miss Tom Bergeron. And we aren’t the only ones.

“Tom has been around for so long. He is really the heart of the show,” said DWTS pro Witney Carson in an interview with Us Weekly. “He’s like an uncle to me too. We’re very close, so I think he will be very, very missed.”

Fans expressed their displeasure as soon as the show announced Tom Bergeron would not return. We recently reported on the fans’ negative reaction to the promo advertising the new season.

Even if you’re upset about Tom Bergeron leaving the show, will you still watch? Sound off in the comments. Remember to follow TV Shows Ace on social media and regularly check back with us for news and updates. We’ll update you as soon as we know more about when the new season of Dancing With The Stars will air.