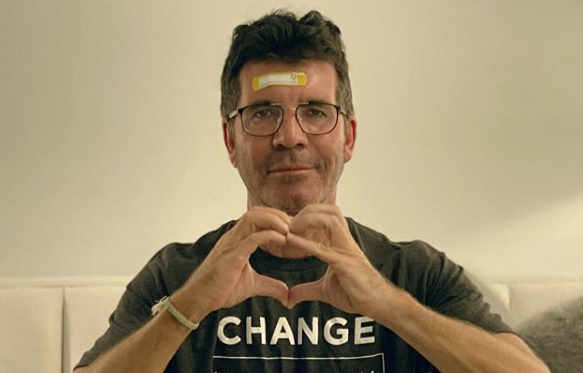 Simon Cowell could really use your well-wishes right now. The 60-year-old America’s Got Talent judge was injured in a bike accident yesterday. According to TODAY, Cowell was taken to the hospital where it was discovered he broke his back. Surgery followed.

“Simon had a fall from his bike on Saturday afternoon whilst testing his new electric bike in the courtyard at his house in Malibu with his family,” said one of Cowell’s spokespeople. “He hurt his back and was taken to the hospital. He’s doing fine, he’s under observation and is in the best possible hands.”

According to Page Six, Cowell is recovering after a lengthy surgery. A source told the publication Cowell is in “recovery and asleep.”

“He had to have a big surgery, he’s got a number of breaks and has had to have a metal rod put into his back,” the source said. “When he fell off the bike he landed right on his back which broke in a number of places.”

Page Six reports Cowell was at home in Los Angeles with family members when the accident occurred. He was trying out his new electric bike and reportedly fell on his back. Cowell reportedly struggled with his weight in the past, so he took up biking for exercise.

But that is, unfortunately, all that is known at this time. Many news outlets say this is still a developing story.

Simon Cowell’s accident occurred just weeks after “#ripSimonCowell” trended on Twitter at the end of June. After news of the accident broke, OneDirection fans immediately took to Twitter. The tweets were less than kind. A feud between Simon Cowell fans and OneDirection fans has been brewing over the past month.

No matter what side of the argument you fall on, please be kind in this difficult time.

Just a few days ago, Cowell shared a short video on his Instagram page celebrating America’s Got Talent‘s 15 year anniversary. You can watch that here:

It’s @AGT’s 15 year anniversary and we’ve had some incredible talent over the years. Thank you to all of you for tuning in and watching the clips online. Tonight we’re counting down the Top 15 viral clips from the show and some may surprise you.

The Coronavirus pandemic certainly disrupted production on America’s Got Talent. The first of the audition episodes aired on May 26 and concluded on July 14. Special episodes such as “AGT: 15th Anniversary Special” followed. As of the end of July, the production staff plans for the live episodes to air on August 11.

But what about Simon Cowell?

We're going LIVE this TUESDAY 8/7c for the #AGT Live Shows! See you there. pic.twitter.com/uUNoxN02Yh

The premiere is two days away, so it’s probable the new season will air as scheduled. However, Simon Cowell may not be joining the live crew. That’s just two days away, and with a broken back it’s likely he won’t make an appearance anytime soon.

We at TV Shows Ace wish Simon Cowell a speedy recovery. Hopefully, he will heal quickly and can get back to doing what he loves.

What do you expect will happen on America’s Got Talent this season? Who were your favorite contestants from the audition episodes? Share your opinions with us in the comments. We’re always excited to hear from you!