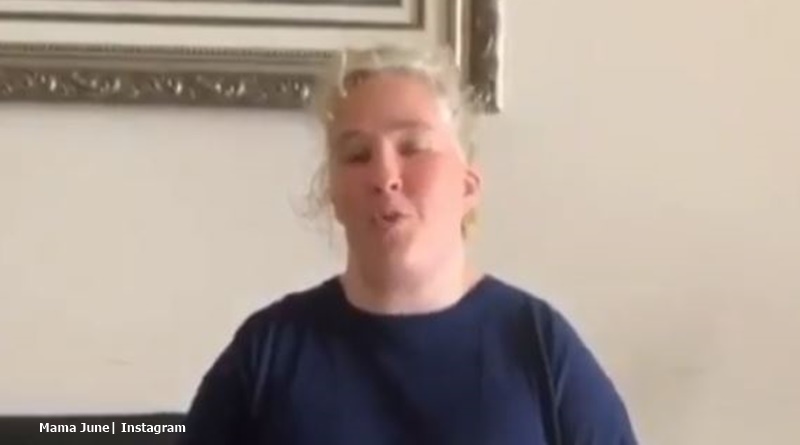 Mama June went off to rehab in the last episodes of Family Crisis. After that, she started sharing on Instagram about how she and Geno stay in Florida at the moment. It appears they still attend regular sessions there. And, her friend Adam Barta helps her get fit again. Now, she celebrated her first six months of sobriety. Gina Rodriguez, her manager from WEtv gave her a special sobriety chip.

On Saturday, August 7, Mama June took to her Instagram and shared a video clip. She said that Gina Rodriguez gave her the special chip as she hit six months sober. June said, “It’s probably the most thing I’m proud of.” June also mentioned that her birthday comes on Monday. But, she couldn’t wait to show it to her fans. June added, “me and Geno are over six months clean.” June thinks the chip’s “amazing.”Again, she reiterated her pride in the achievement. Then, in the caption, June once again expressed her pride at the milestone.

The caption promoted some cookies, but also said, “Thanks so much to @ginarodriguez n @b_lynnsnail for the gift. I love The blinged out six months chip. I’m very proud of as me and @doakgeno.” Gina replied, saying, “We love you.” Adam Barta also replied, saying, “Love it, it sparkles and you deserve it 💕 and also save me a cookie pls.” Naturally, her fans enjoyed the good news. One said, “Congratulations Mama June! I’ve missed that wonderful woman that was inside you all the time! Love you Girl❤️.” Many similar comments followed.

Spruced up June gets lots of encouragement

It certainly looks like Gina and the crew at WEtv encourage June in her efforts. And, many fans love that she started caring about the way she looks. After all, people on meth seldom worry about that sort of thing. We reported how happy June looked after she got her hair done in late July. We noted “June smiled a ‘real smile,’ the first one fans saw in a very long time.” June previously shared that her broken tooth got all fixed up. And, it “seems that the old June, buried by debt and addictions, is making a comeback.”

Mama June came a long way since fans saw her on Family Crisis. Hollywood Life reminds readers, that her drug addiction… upended her life and damaged her relationship with her children.” Fans also saw June confessing in the show that she and Geno splashed out around $150k on meth. That’s why she sold her home. In the show, the production crew sounded shocked when she revealed they spent up to $2,500 a day on meth.

What do you think about Mama June feeling so proud of her sobriety chip? Are you also proud of her? Sound off in the comments below.