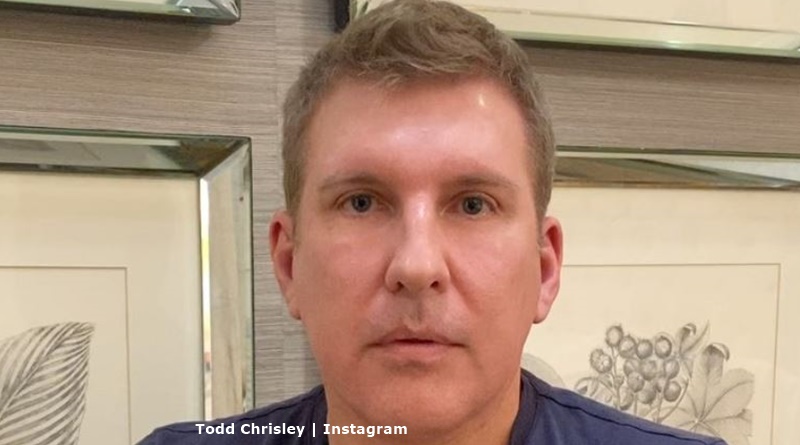 Todd Chrisley shares something on social media almost every single day. Sometimes, he talks about quotes and Christian insights. But often, he shares photos of his family as well. He shared a photo of himself water skiing on Friday. A fan got off lightly as Todd’s well known for slamming trolls. But later, he shared about the fan calling him “chubby” with Savannah. And, she chuckled over his private reaction to it.

The Chrisley Knows Best patriarch took to Instagram on Friday and posted about enjoying fin on the water. Now, fans often go on Todd’s Instagram for the comments. That’s because he’s well known for blasting trolls with brilliant comebacks. And sooner or later, someone always says something that gets an epic response from Todd. We reported that Todd told off a follower who commented about a recemt picture he shared of Chase and his girlfriend.

In that post, Todd Chrisley got someone saying that he’s “creepy” as he posts “too many photos” of his son. That time, Todd simply said, “stfu.” But, he brings plenty more to the table that sees fans engaging with him and telling him he’s on fire. Plenty of examples exists if you browse through his Instagram. But this time, the fan who criticized Todd did it nicely. Maybe that’s why Todd responded without too much malice.

Public reaction to the person who called Todd Chrisley ‘Chubby’

The follower said to Todd, “Omg it’s me or tod got a little chubby because I remember back then he use to look skinny but I guess this year he got a little chubby lol 😂 tod if you see this i don’t judge you, you look great like that.” Well, it seems Todd comes with an all-seeing eye as he always spots critics, even nice ones. When Todd responded publicly on the post, he said, “same size I’ve always been and my weight doesn’t shift but by 5lbs so yes, I’m chubby as hell.” Note that touch of sarcasm, but he responded rather kindly in comparison to some of his other responses to criticism.

Privately, Todd and Savannah talked about it a bit. Savannah shared it, and so did Todd Chrisley on his Instagram Stories. He said to Savannah, “Someone called me fat on my Instagram. So I’m skipping desert until tomorrow,(sic).” Savannah chucked at that. The response read, “hahahaha I am dead. I’m posting that.” The caption across the bottom read, “I know the feeling @Toddchrisley.” 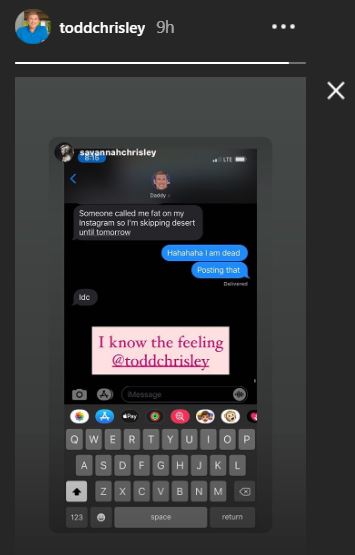 What did you think of Todd Chrisley responding to the critic who called him “chubby?” And what about the little chat about it that Savannah totally relates to? Sound off in the comments below.