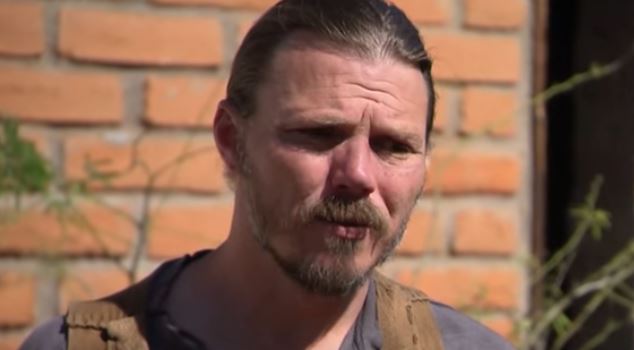 Jason Hawk wants to use the grinder, but he’s not sure his injured hand will let him.

Jason Hawk of Mountain Men hurt his hand about three months ago on the grinder. Because he wanted to sharpen a knife he made the accident caused him a fractured hand and broken bones. Without a doubt, the injury was affecting Jason’s work and he just wasn’t doing his best. Jason struggled to make the tools as he used to. Because he was unable to use his hand fully, he had to settle for tasks that didn’t put stress on his hand.

However, Jason Hawk waited for three months for his hand to heal. Finally, Hawk was ready to give his injured hand a shot at making his famous 10-inch blade. The knife has always been a moneymaker for Jason, and the hand injury had left Jason with financial problems. He knew he had to start making money fast and the knife would get him back in the game.

Back On The Grinder

Jason Hawk has been lucky enough to have his wife helping him out while his hand healed. However, he decided he couldn’t wait any longer to get back to work. Jason brought the needed materials to make the knife. He has to get the shape of it just right and it will sit to make sure the knife has no deformities. Jason was pleased with the way it looked, so it was time for him to use the grinder to sharpen the knife. This was the first time Jason was using the grinder after the incident according to MEAWW.

Without hesitation, Jason Hawk started working and within seconds, he got the result that he was hoping for. With a perfectly shaped blade, the next step was to connect the wooden handle to the blade. Once he got that into place, Jason Hawk was really pleased with the result.

Jason did admit his hand was not at 100 percent, however, it can get the job done. When Hawk showed his family the finished product they thought it looked good. With the knife in hand, Jason believed he could sell it for a good price.

Jason Hawk originally from Arkansas is a blacksmith by trade and his specialty is making blades. As far back as 1999, Jason has been creating his unique knives. Jason has said, ” I create functional goods from natural and scrounged materials. I use the elements and traditional techniques, letting the tools leave there marks. Each detail is carefully worn to achieve a unique piece, with a rich time worn look and personality.”

You can watch Jason Hawk and his family on Mountain Men when it airs on Thursdays at 9 pm ET on History Channel.