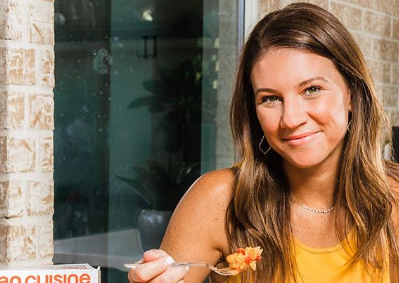 As most reality stars do, Danielle Busby occasionally posts sponsored content. The Outdaughtered star recently took to Instagram to share her love of frozen dinners. Fans didn’t believe she actually ate the dinners, and was just looking to cash in on advertising for a brand. The picture in question is a post showing Busby eating a Lean Cuisine bowl of Orange Chicken.

For Danielle Busby, she’s used to being trolled on social media. She gets mom-shamed a lot for how she raises her quints and their older sister. Famously she’s known to clap back when people get too out of line. This time, she took the high-road and just responded calmly. She has a lot of patience from chasing six kids around.

What Were Fans Saying About Danielle Busby’s Sponsored Posts?

When Danielle Busby posted her picture enjoying a Lean Cuisine meal she got a lot of hate. She captioned it, “For our current meals, we like to stick to quick and easy options that are still delicious. I am glad @leancuisine offers nutritious microwavable meals like this. I love how this bowl offers 20% more ounces compared to the previous tray recipe, because by dinner time, this Mama is always starving.” She said it was a lot easier for her because they are using a temporary kitchen while remodeling their indoor one according to In Touch.

Reactions weren’t friendly. One user said, “so annoyed with you make money over everything. Officially over you. So disgusted.” That seemed harsh for a post about easy meals. Another said, “Sorry, I can’t imagine you putting that crap in your body. We both know you don’t eat that crap.”

Another claimed to know her eating habits because they’d watched the show. A fan said, “I’ve watched since day one and I’ve never seen you eat a Lean Cuisine. Don’t believe the hype. You are better than that.” It seems Danielle can’t get away from the haters no matter what she does. She never hid that the post was sponsored, but followers smelled blood in the water anyway.

Danielle Had Some Fans Come To Her Defense

Danielle Busby had some fans who came to her defense. She replied to the haters with a message of her own. She said, “I eat and share on my stories all the time. The lean cuisine broc and chicken Alfredo is my fave.”

These days all our meals are made outside in our temporary kitchen since we are remodeling the kitchen indoors. For our current meals, we like to stick to quick and easy options that are still delicious. I am glad @leancuisine offers nutritious microwavable meals like this new Lean Cuisine Orange Chicken Bowl. I love how this bowl offers 20% more ounces compared to the previous tray recipe, because by dinner time, this Mama is always starving. 😊 #sponsored #DeliciousYourWay

Her fans supported her and showed their support on her post. One said, “you go girl. Don’t listen to haters!, Another said, “good for you lady! Doing what you gotta do to support your family.” Another fan told followers to leave her alone. What she chose to eat was her business. Fans can be sure, Danielle will always stick up for herself and not let the haters get to her.