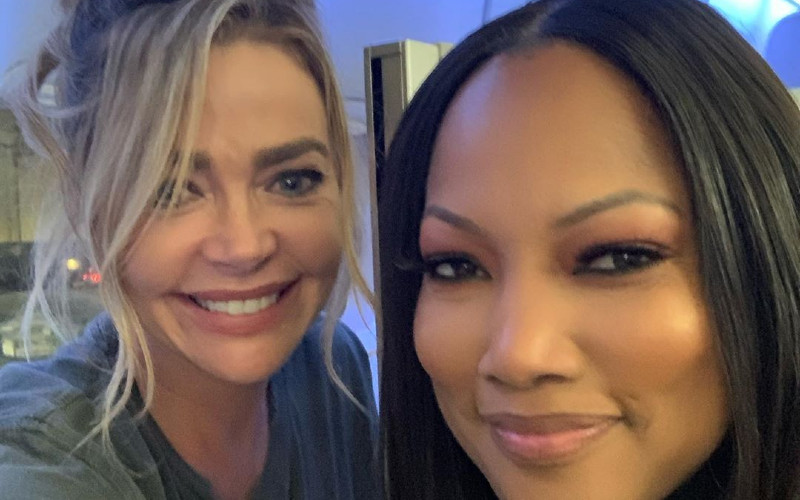 Denise Richards has been friends with two of her The Real Housewives of Beverly Hills co-stars for over 20 years. It seems that only one of those friendships survive the tense Season 10. Denise’s friendship with Lisa Rinna is on thin ice at this point of the season and it only gets worse. The two reportedly have a confrontation at the Season 10 reunion airing later this year.

RHOBH star Garcelle Beauvais, however, seems to have Denise’s back. She is the only one still defending Denise amid allegations of an affair with Brandi Glanville. The other women have denounced Denise as a liar.

RHOBH Co-Stars Make A Pact About Returning For Another Season

Denise Richards and Garcelle Beauvais are newbies on RHOBH compared to Lisa Rinna. Season 10 is Denise’s second season and Garcelle’s first. Due to her busy acting career, Garcelle hasn’t been a huge presence on the show. But when she does attend events, she often speaks her mind.

But she’s not above the drama. In a recent episode Teddi Mellencamp teased a rumor she heard about Denise from RHOBH alum Brandi Glanville. The rumor is that Brandi and Denise hooked up. During dinner in Rome, Garcelle encouraged Teddi to spill the secret, not knowing what it was.

Once the secret was out, Garcelle did side with Denise, saying it was no one’s business. She seems to be the only one on Denise’s side. The other women believe Brandi’s side of the story. Bravo came clean in the season premiere that Denise stopped filming in December of 2019, which is coming up on-screen. As a result, speculation about her potential return for another season has been rampant.

Garcelle recently spoke with EW Live on SiriusXM. She said that she doesn’t know if Denise will return, but hopes so. Additionally, the Jamie Foxx Show actress revealed that the two have spoken about it. She said that they made a pact of sorts in regards to Season 11:

For Bravo’s part, Andy Cohen said he also hopes Denise will return for another season. She’s also spoken out, saying she will “if it makes sense.”

Lisa Rinna had some words of wisdom for Garcelle to consider before signing on for Season 11. The Days of Our Lives alum told Garcelle that her second season would be a lot rougher than the first. Garcelle recounts to EW Live that Lisa Rinna said, ‘Your first season is always nice and pleasant and the second one they come for you.”

Fans are clearly seeing that with Denise this season. Her first season was relatively drama-free. The focus of Season 9 was solely on Lisa Vanderpump and ‘puppygate.’  However, fans think the RHOBH ladies have found a new target in Denise Richards for Season 10.

A photo from Denise’s Instagram shows her during happier times at the Season 9 reunion.

Garcelle also gave credence to the reports that Lisa Rinna and Denise Richards got into it at the reunion. She says that the “cease and desist” letters were brought up by Lisa Rinna. Garcelle admits that she didn’t get a letter but “some of the others” did, People reports.

Fans will have to wait for Season 10 to play out before we can see the reunion drama. However, the preview for the upcoming episode appears to be Denise’s last. The Real Housewives of Beverly Hills airs Wednesdays on Bravo.