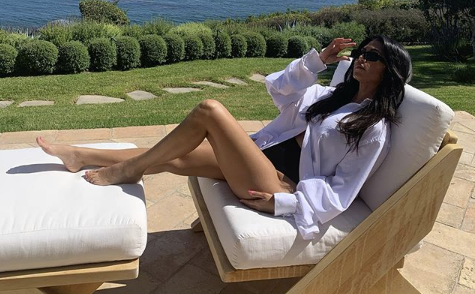 Are Scott and Kourtney back together or not? This is the question that seems to be on every fan’s mind these days. Kourtney Kardashian recently referred to Scott Disick as her “husband” in an Instagram post. And now it seems she’s sending more affection his way. Kourtney recently “liked” one of Scott’s own handsome Instagram posts:

Insiders Deny Kourtney Kardashian and Scott Disick are Back Together

“Scott and Kourtney are really close but there’s nothing there besides them being co-parents and best friends,” an inside source told HollywoodLife. “Scott will always love her and she’ll always have a place for him, but there’s no way these two would ever get married. It was just a joke.”

Scott is Currently Seeing Someone Else

Besides these days, Scott is dating Sofia Richie. They reportedly split up in May after three years of dating but rekindled their romance in July. During their time apart, fans speculated Scott and Kourtney might get back together. However, since Scott and Sofia renewed their relationship, this doesn’t seem likely.

According to reports, Scott is trying very hard to change his behavior and keep Sofia around.

“Scott has been much more calm and responsive to people outside of his family over the last month or so,” says one source. “Whatever issues that were bubbling up between Sofia and Scott at the start of the pandemic have simmered down and Scott has returned to a place where Sofia feels comfortable being around him and being in his life again.”

Perhaps whatever chemistry between Scott and Kourtney is all in our heads. Or perhaps it isn’t.

Even though the insider says Scott and Kourtney definitely are not back together, the pair spends a lot of time together these days. They went out to Malibu with their children along with Kim and Kanye’s kids. It seemed like a perfect little family vacation.

A more likely explanation is that Kourtney and Scott are just really excellent co-parents. Besides, Kourtney seems happy enough on her own these days.

“She’s telling friends she’s actually happy being single right now and just seeing where it takes her. She seems open to anything with anyone right now,” the insider tells HollywoodLife.

What do you think of the Scott and Kourtney rumors? Is there any truth to them, or are they truly just good friends and co-parents? Let us know what you think in the comments.

Keep up with TV Shows Ace by regularly checking in with us and following us on Social Media. We’re always ready to give you the latest celebrity and television news.