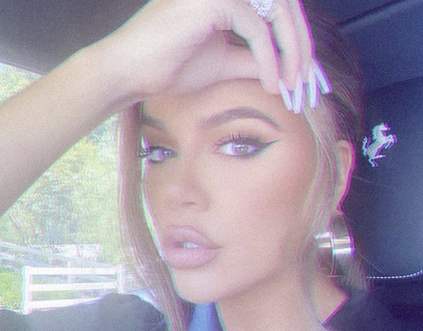 We have an update regarding Khloé Kardashian’s Good American lawsuit. We originally reported on it back in June when The Blast obtained revealed part of the legal documents. Now, we are learning more.

In case you haven’t heard, there is a fashion lawsuit that involves Khloé Kardashian. An independent Los Angeles designer known as dbluedazzled accused Khloé’s company, Good American, of stealing their designs a few years ago. The whole situation makes Khloé reportedly feel “outraged.”

The Blast obtained legal documents regarding the lawsuit. According to the publication, in the documents, Khloé describes how she came across dbluedazzled. Allegedly, one of Khloé’s former stylists brought her some of the L.A. artist’s catsuits during a fitting.
“My former stylist ‘without my prior knowledge or authorization, brought three (3) catsuits from dbleudazzled to a fitting for me,” Khloé says in the statement. She earnestly believed the suits were “gifts from Destiney Bleu.” Destiney Bleu is the owner of dbleudazzled.
“I was flattered but very surprised that Destiny and dbleudazzled would gift me those items since I happily paid full price for all of the other items I purchased from dbluedazzled,” Khloé continued. “Moreover, harkening back to my days running my small boutique Dash with my sisters, I like supporting small shops and independent designers.”
According to the documents, Khloé learned some shocking news a few weeks later. She would have to purchase or return the suits.

“Unfortunately, they had already been altered to fit my body, and couldn’t be returned,” she stated. “I never would have ordered the catsuits and had no interest in purchasing them.”

And So, the Lawsuit Began

As a result, dbleudazzled sued Khloé Kardashian and her company, asserting she stole the designs. They also allege that Good American put out products that were incredibly similar to theirs and never paid for the rights to the designs.

“When Destiney claimed in June of 2017 that I and Good American somehow copied her catsuit designs for Good American’s line of bodysuits, I was outraged,” Khloé continued. “There is absolutely no truth whatsoever to this claim. As I said, I never showed anyone at Good American sample or photographs of any of the debludazzled designs.”

The KUWTK star goes on to say the companies’ catsuits are very different. She attached photos and pointed out key differences between the designs. Khloé Kardashian’s lawyers asked the courts to throw out the lawsuit.

Stay tuned. We will let you know as soon as we know more about this lawsuit. In the meantime, let us know what you think. Did Good American steal the designs, or was it just a coincidence? We’re curious to hear your opinions in the comments.