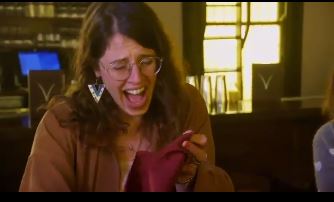 The Season 11 couples on Married at First Sight are stirring up social media and strong emotions more than a great pot of gumbo, and the honeymoons barely got started on this week’s August 5 episode, “What Happened Last Night.”  The five sets of newlyweds are definitely getting close, but not in the way that some past couples or fans expected.

Cozy, yes, intimate, no for these ‘Married at First Sight’ matches

For the first time since Married at First Sight expanded to five couples, none of the Season 11 couples opted for physical intimacy on their first wedded night.   They did, however, delve into very deep subjects that forged emotional intimacy.  Fans are giddy for Bennett and Amelia, and one of the sweetest ways that the groom conveyed that “I think we’re flirting” was after he and his bride traded glasses.  She also loved the way her hubby slept in a dress and cocooned his body totally in the garment.

Woody was totally up for warming Amani’s feet in the night and sharing a few kisses.  The pair also paid a surprise visit to Miles and Karen that was so heartfelt and pure cuteness.  The exchange only lasted a minute, to mark the two grooms’ shared Married at First Sight experience.  The brides were kismet, too. After dosing and rubbing Karen’s feet, the chivalrous Miles made sure that he took Karen’s headdress and all the bobby pins out of her hair before turning in for the night, and she did change out of her wedding dress.

It’s not too surprising that Henry and Christina are moving at their own slow pace, but at least Christina isn’t confusing her new husband’s name now like she did after her ceremony.  What is more surprising is that Brett and Olivia, who both expressed that they couldn’t wait to find out what happened when cameras left, spend their time cuddling and talking through their first night.  As for Henry and Christina, Christina at least woke up with hope for her guy, and she looks forward to showing him the world, starting with their Married at First Sight honeymoon.

There were no meltdowns during any of the  Married at First Sight family brunches between the brides, grooms, and in-laws.  One thing going for Christina is that she absolutely loves Henry’s dad, and Henry’s family seemed smitten with her, teasing that if she and the groom didn’t last, “we’ll take you” and go on trips.

This season's just getting started and we already can't get enough of Bennett and Amelia. 💘 pic.twitter.com/LoJO33nYIX

One of the sweetest gifts given at the table was the lollipop presented to Amelia, representative of her new relationship with Bennett.  Deb, Bennett’s mom, urged her new daughter-in-law “savor every last lick” and praised the “relentless kindness” in the son who she cherishes “as a human being” above and beyond being his mom.  Molly, his sister, mentioned that her brother was “ethically opposed to having natural children,”  feeling that adoption was the nobler humanitarian stance.  This probably made Amelia’s ovaries stand at attention, but she only said she would discuss that with her husband later.

Is Bennett being honest?

Bennett got rave reviews from Polly, Amelia’s mom, who said the pair were like “puzzle pieces,” before posing a daunting question.  The mother-in-law asked it Bennett would be willing to move if Amelia took a residency in Baltimore or Virginia, where she had also applied.  The serious look on Bennett’s face couldn’t be missed.

He responded that he could not answer completely affirmatively after just 16 hours, but if he grew to “adore her” as he expected, a move would definitely be possible.  Amelia’s brother, Noah, them closed the table talk with a marvelous and memorable Married at First Sight analogy.  He described his sister as being like a ring pop, but instead of just delicious candy, “you get a real diamond.”

Bennett conceded to his bride that he could be swayed to have a natural child if he knew that life goal was one that would fulfill his partner.  Amelia was delighted that her husband was willing to even consider a move for her residency so early.  It’s a promise that this issue is not going to disappear for these lovebirds.

Do Woody and Miles have a dark side?

Amani was as delicious and welcome as warm apple pie with her in-laws.  She told on her new groom for “smacking” croissants in bed, as Heavy noted in an August 5 Married at First Sight preview.  Nonetheless, the bride was forgiving of that faux pas, for now.  When she asked what reaction Woody gave when he was angry, she got an answer that stopped her in her tracks.  “I’ve seen the devil come out in him,” his grandmother described.

Of course, Amani broached the topic with her husband, who said that he had learned a lot from counseling about how to deal with issues from his growing up years.   “We’ve all done things we regret,”  she responded.  The two closed their conversation in an embrace.

Woody’s time with Amani’s family sailed smoothly, too, even when he was very honest about compatibility issues and cheating in his past relationships.  Straight-up truth speaks a lot about character, and so far, Woody is gaining points toward his Married at First Sight future.

Miles is also making good ground with Karen’s mom.  He defended what makes him “a great guy,” especially noting that “her first” in all things.  Karen faced her own question on wifely submission from Miles’ mother. “I trust him to make the decision, but me next,” she related regarding her attitude.  Her mother-in-law flatly stated that if things didn’t work out, she was standing ready to pick up the pieces for her boy.   This level of involvement could become a bone of contention later on Married at First Sight.

Olivia can stand her ground

Olivia held up just fine to the grilling by Brett’s brothers, and she stood her ground, too.  She let it be known that while she’s thrilled to be married, she has no desire to rush into motherhood.   “I want to enjoy it,” she says of married life, and Brett’s siblings were in accord. Brett was asked about Christian values. He responded honestly that he was not “practicing” any longer in the faith, but used its principles in daily life.  His promise to protect his new wife was music to her family’s ears.  Fans are rooting for Olivia’s goodness to cultivate Brett’s good behavior, but something tells most viewers that it may be short-lived.  Miracles do happen on Married at First Sight, but only with the effort of two committed people.

It's easy to feel nervous at this stage. Henry takes a while to warm up. He must step out of his comfort zone and risk letting Christina know the real and fun Henry that we all first met. #MarriedAtFirstSight

Henry doesn’t need a miracle– he needs a Married at First Sight conversation starter book.  This is another case of a groom that most folks want to cheer for, but he needs nudging, even from himself.  He called his time with Christina’s family “smooth conversation,” but they prodded and prodded to get very limited words.  He asked if they could share any funny stories about Christina.  Instead, the reply came that her “love language” was deep conversation and communication.  Experts, these two need help ASAP and start simple!

Speaking of Henry, one of the few glimpses of Married at First Sight’s most shy groom loosening up was when the baskets arrived to each couple, revealing their Mexico honeymoon destination.  Christina’s enthusiasm about the travel seemed to buoy him, and he relaxed even more once he tasted mescal for the first time before dinner.

Karen was the one who really enjoyed dinner, remembering every delicious dish that she devoured.  No one knows where she puts it all, but food is definitely a connecting point for this couple.  Miles doesn’t mind his wife’s appetite.

Amelia and Bennett take the prize for the cutest preflight announcement, saying in unison that they were “Expecting….to have a good time!” in Mexico. The Married at First Sight couple was also the first to dive into the river outside their door.  More deep dives are definitely ahead.

So far, Brett’s suitcase on the bed is the only thing that bothers Olivia.  Before the test of real life, it would be nice to see if she can get below the surface with him, not meaning the sheets.

Amani put it plainly that “just because we’re married” doesn’t mean intimacy happens.  She wants Woody to be worthy and their moment to be right.  Still, any Married at First Sight couple with this much energy and natural attraction shouldn’t waste the passion.  Honeymoons are the time when abandon is allowed.

Honeymoon photo albums are sure to be filled with next week’s memories on Married at First Sight, so stay tuned to TVShowsAce for all the updates.