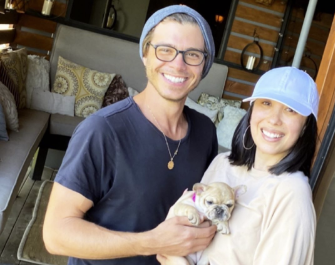 Celebrity baby news seems to be flooding the headlines these days. Quarantine time resulted in many pregnancies and adorable birth announcements. However, one celebrity couple is doing things a little differently. Dancing With The Stars pro Cheryl Burke and her husband, Matthew Lawrence, want to be parents. Unfortunately, the pandemic sort of put a dent in their plans.

“We’re just waiting to see what happens because I think we were going to move, we were going to start that next journey, but everything’s a little bit on pause right now,” Matthew said in an Us Weekly interview. “When this starts to clear out, I think we’ll have a better view or understanding.”

It makes sense. It’s a very scary time for pregnant women, who are part of the high-risk group. So for the time being, the couple is content with being puppy parents. Matthew surprised Cheryl with an adorable pup for their anniversary. They named her Ysabella.

“This is a perfect test with our little dog,” Cheryl told Us Weekly. “At least with kids, we can put a diaper on him, but these dogs, they just squat and that’s it. Screwed. Totally.”

Matthew Lawrence is apparently no stranger to pets either. Back in September 2018, Cheryl told Us Weekly about how Matthew moved in and brought a “zoo” with him.

“He’s building a zoo in my house for the animals,” Cheryl said. “The tortoises just came over and the baby tortoises. The 25-foot-long iguana’s on its way. He’s building, like, a gated, cage. I come home sometimes at midnight, and he’s down there working. … I’m marrying his iguana and his tortoises!” The couple went on to marry in May 2019.

Dancing With The Stars Returns in September. Will Cheryl Come Back?

Cheryl is well known for her professional dancing skills. She won the second DWTS season with Drew Lachey as her partner. However, she feels the show changed a lot during its 15-year run. She wrote a very honest piece for Us Weekly during the show’s 28th season. Cheryl felt especially strongly about the was James Van Der Beek was treated.

“What they did to him was harsh,” she wrote. “I think just the world we’re living in right now, there’s no grounding. People need to actually talk from their hearts and instead, people are on the defense constantly.”

Read through this previous TV Shows Ace article to see our take on it.

Dancing With The Stars returns for Season 29 next month, insiders confirm. But we don’t know for sure that Cheryl Burke will return with it. According to Extra, Cheryl says she would love to come back but isn’t sure yet. No one is even exactly sure when the show will return or who the celebrity cast members are. There is still a lot up in the air for now, but we can be sure DWTS will return on Monday nights in September.

Who do you think will take the stage this season? Let us know in the comments. Follow TV Shows Ace for the latest DWTS news.