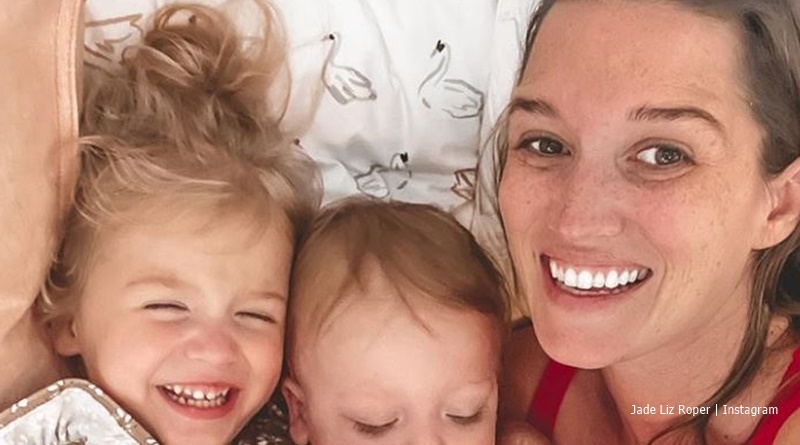 Bachelor In Paradise (BIP)  alum Jade Roper shares a lot about her life on social media. And, sometimes she tosses convention out the window. This time, she shared a photo of herself with her panties down. Bachelor in Paradise fans thought it was rather “visual,” but she generated lots of smiles in the context of the caption she wrote.

BIP fans laugh at Jade Roper with her panties down

You might wonder why on earth Jade would share a photo of herself with her panties down. After all, it’s not the sort of thing most people do. Especially, when it involves perching on the toilet and getting down to business. But, most moms relate to that sort thing and Jade’s the mom to Emmy and her one-year-old son Brooks. Practically anything can happen to moms with small kids, it seems. On Wednesday, Jade took to her Instagram and share a photo of herself, well…sitting on the toilet with her panties pushed down.

The BIP alum’s 1.3 million followers could see the toilet rim. And, between her legs, a rather concerned-looking Brooks stared up at his mom. She captioned it with, “Are you even a mom if this isn’t your reality? 🤣🤣🤣 jk, but my kids ALWAYS seem to find me when I’m in the bathroom. Never fails.” One fan replied, saying, “This visual 😂.” But, plenty of moms and moms of pets know exactly what she meant by the picture.

Bachelor in Paradise fans started sharing their own experiences on the post by the ABC star. One of them wrote, “This also accounts for dog moms 😂.” Other BIP fans totally agreed. Here’s what some of them said:

Seriously? It sounds like animals really enjoy humans going to “potty,” much like the BIP alum’s son, Brooks.

Are you even a mom if this isn’t your reality? 🤣🤣🤣 jk, but my kids ALWAYS seem to find me when I’m in the bathroom. Never fails. #reallife #mommingtheshitoutoflife 🤭

Kids, the toilet and moms

Most fans talked about their kids though. And, it seems that mom going to the bathroom becomes something of a fixation for littlies. Lots of them related their stories about their children doing the same thing. Actually, it’s so common that Today’s Parent actually wrote an article about it. They noted, “It’s jarring, it’s uncomfortable and it’s just weird. But believe it or not, it’s weirdly normal for kids to want to watch you do your business.”

The BIP star’s not alone because “one reason for this invasion of privacy is plain and simple curiosity” After all, “it’s strange, new and fascinating to them, and when you’re on the toilet, they have a front-row seat to a serious mystery.” Can you relate? Share your stories in the comments below.