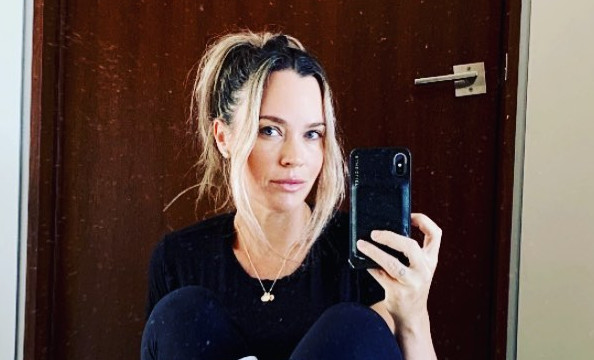 The Real Housewives of Beverly Hills fans are loving Teddi Mellencamp this season. Or rather, they love that she’s hardly ever on. In the early episodes of Season 10, she got very little screen time. However, that’s not her fault, she says.

The accountability coach responded to fans’ complaints over her gossiping about Brandi Glanville’s shocking allegation. The RHOBH alum appeared in an episode earlier this season to allege that she had an affair with Denise Richards. Denise denies the affair. Brandi also told Teddi (and Kyle Richards) some negative things Denise allegedly said about them.

While Teddi may have been on the backburner at the start of Season 10, she’s in the hot seat with fans now! After some hemming and hawing during the July 29 episode, Teddi finally spilled Brandi’s tea. First, she confronted Denise about allegedly calling Teddi “pathetic.” Then she alluded to Brandi saying something even worse about Denise.

After prodding from Garcelle Beauvais and Lisa Rinna, Teddi finally told Denise what Brandi is saying about her. Brandi says that she hooked up with Denise while visiting her on location for a movie.

In the past, Teddi has been called a sh*t stirrer by fans and her RHOBH co-stars. Needless to say, fans were not happy with Teddi repeating Brandi’s allegation on camera.

RHOBH Star Says She Puts ‘It All Out There,’ But Can’t ‘Choose’ What Airs

Many RHOBH fans rejoiced by Teddi sitting in the backseat this season. Teddi was actually pregnant during filming, so that may have affected her screen time. Or Sutton Stracke was correct when she called Teddi “boring.” It’s a refrain of many fans as well.

Sutton called Teddi out during last week’s episode for repeating Brandi’s rumor. The socialite feels that Teddi did it out of revenge for getting her feelings hurt. It seems fans are also hurting Teddi’s feelings with their comments.

The RHOBH star took to Twitter ahead of the August 5 episode to clap back at haters. She shades Denise in the process by saying she puts “it all out there.” Teddi and her co-stars feel that Denise is trying to hide part of her life from the cameras.

However, Teddi says that it’s not her fault that she’s not a huge part of Season 10. She says she “can’t choose what makes it to your screens.”

You watch #RHOBH for entertainment & view into our lives. I put it all out there; I can’t choose what makes it on your screens. But what’s said/done on-camera becomes our reality. I live my life authentically & can rest easy despite what 💩 comes my way. 9PM tonight on @bravotv! pic.twitter.com/Jcw84bObie

Several fans went off on Teddi in response to her tweet. They called her “John Mellencamp’s daughter” instead of her name. One of the things Denise allegedly said was that Teddi lives in her dad’s shadow. John Mellencamp is, of course, an iconic rock musician.

Some fans float the idea of taking Teddi’s diamond (lead role) and giving it to Sutton instead. Tell us in the comments if you think Sutton should replace Teddi in the main cast.