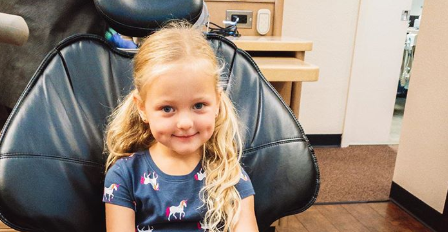 Ava and Olivia Busby (affectionately known as Lulu) are “the twins” within the OutDaughtered quintuplets. Because Ava and Olivia are identical twins, some fans really struggle with telling them apart on social media.

As the quints age, it becomes easier to tell them apart.

OutDaughtered fans are always struggling to tell which quints are featured in social media posts. Because they are identical twins, Ava and Olivia are mixed up more than any of their other sisters. And, because they are “the twins” of the OutDaughtered quints… Fans especially love with Adam or Danielle Busby treat them to content featuring “the twins.”

So, fans were especially thrilled when they learned Adam Busby spent a little quality time alone with “the twins” today. As Adam revealed on both his Instagram profile, the It’s a Buzz World profile, and his Instagram Story… Ava and Olivia Busby had to go to the dentist today.

Now, a few hours ago Adam Busby shared a collection of snapshots from the trip to the dentist. Fans quickly noticed a pretty distinct physical feature of Lulu’s. As the girls age, this feature seems to get more distinct. Perhaps this feature will make it easier for fans to tell Olivia and Ava apart!

So, what is this feature of Olivia Busby’s that fans are obsessed with?

If you take a good look at the photos in the Instagram post below. You will notice one physical feature that is distinctly different between the two girls. What is it? Well, Olivia has very deep dimples on her face. Dimples that only seem to grow when she flashes a huge smile.

Now, Ava Busby does have dimples too. But, they are not nearly as distinct as her sister. So, if you go back through the photos and focus on the faces… It becomes much easier to tell which photos feature Olivia Busby because of those adorable dimples in her face.

Brought the twins for their check up at the dentist today! They rocked it! #outdaughtered #itsabuzzworld

OutDaughtered fans quickly became obsessed with Olivia Busby’s adorable dimples. And, they sounded off about it in the comments. Here’s what they had to say.

Some fans also speculated Olivia Busby might be a tad camera shy compared to some of her sisters. They noticed she seemed to shy away from the camera a little more than her sister Ava did.

@dbusby and me are dividing up the kids and knocking out some errands now that we have gotten back in town. Took mine on a special lunch date to the Aquarium Restaurant at the @kemahboardwalk to see some fish while we eat! #itsabuzzworld #outdaughtered #ThatsABigEel

So, did you notice Olivia Busby’s dimples? Tell us about it in the comments!