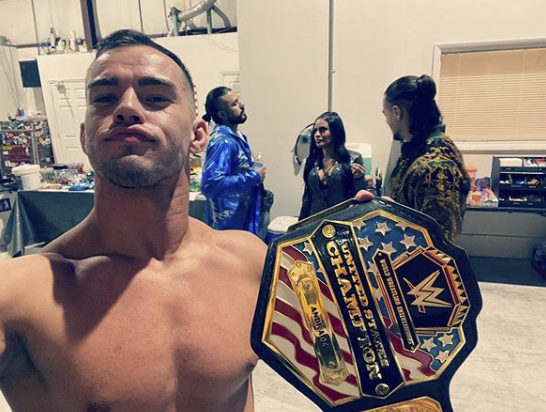 Wrestling fans noticed Austin Theory’s disappearance. No one has seen him on Monday Night Raw in several weeks and his fans really miss him.

Earlier this year, fans got to know Theory as he was introduced as a new addition to Zelina Vega’s stable. The new wrestler joined Andrade and Angel Garza. But this was only supposed to be temporary. They only needed him while Andrade recovered from an injury. In May we learned about new plans. According to reports, they were going to write Theory off the show and transition back to NXT.

However, only a few days later we learned Theory wasn’t going back to NXT after all. Instead, in one episode, Vega, Andrade, and Garza turned on him. As a result, he teamed up with Seth Rollins and Murphy. He stayed with them up until his disappearance. This is his most recent Instagram update, posted a few months ago:

More have joined but fail to realize they are on the wrong side of fate.👁 #allday #wweraw

Fans knew something was up right away on one of the newer Monday Night Raw episodes. Rollins and Murphy appeared, but Theory wasn’t mentioned at all.  So where was he?

In response to a fan’s Twitter question, Dave Meltzer of the Wrestling Observer Newsletter said Theory is on suspension.

Unfortunately, that’s all we know right now. Although, it doesn’t seem that Theory is injured. That’s good at least.

In other WWE news, fans would like to see a new Undertaker match soon.

Mark Calaway (The Undertaker) joined the professional wrestling business since 1990. As the years go by, he’s grown into an icon in the WWE universe.

Recently, the wrestler Sting said wrestling The Undertaker was his dream match. The Undertaker doesn’t want firmly to say “never,” but doesn’t think it will happen.

“I don’t have the mobility or the same skill set that I once did that I would need to make that match great,” The Undertaker says.

In the WWE documentary The Last Ride, The Undertaker grapples with the idea of retirement. It can’t be easy after being in the business for so long, but all good things must come to an end. We can’t really blame him. The Undertaker turned 55 this year. After a wildly successful 30-year wrestling career, we can only imagine how tired he must feel.

What do you think Theory did to earn a suspension? Will The Undertaker and Sting matchup ever happen or not? Share your ideas in the comments.

If you liked this story, make sure to follow us on social media. TV Shows Ace is here to keep you informed on all the latest TV and celebrity news.