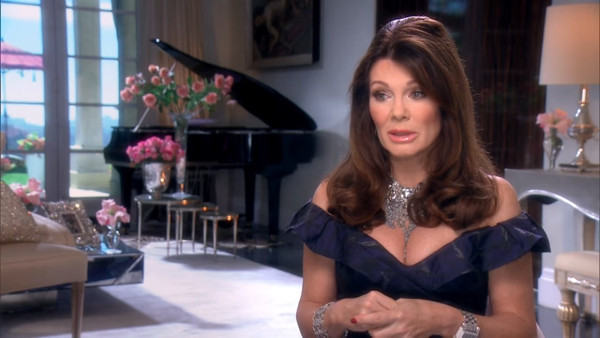 Lisa Vanderpump is finally addressing the diversity of the Vanderpump Rules cast. Or the lack thereof. The SUR restaurateur has been active on Twitter, engaging fans by taking suggestions for podcast topic ideas.

That’s right. The Queen of Bravo is taking over the airwaves with her own podcast. Several Bravolebrities have podcasts, including Pump Rules stars Scheana Shay and RHOBH alum Brandi Glanville.

In addition, Lisa also has a forthcoming Vanderpump Dogs spin-off on NBC’s new streaming service Peacock TV. Both the spin-off and podcast are still ironing out the details. In the meantime, Lisa asked her Twitter followers to chime in their ideas on what she should address on the podcast.

Lisa Vanderpump Gets a Lot of Topic Ideas From Fans

The former RHOBH star’s tweet seeking topic ideas got almost 300 comments. Several fans asked Lisa dog-related questions, such as how to introduce a new dog into the family. As fans know, Lisa is a dog lover and owns multiple rescues, including the famous Giggy.

Since Lisa owns so many restaurants, fans sought recipe advice. One fan asked how Lisa chooses new menu items for her various restaurants. One fan even suggested that Lisa start a cooking show with her daughter, Pandora. Actually, Lisa and Pandora HAVE been filming mini cooking sessions. They can be found on Lisa’s Instagram.

Clearly Lisa enjoyed the idea of a cooking show very much. It was one of the suggestions that she retweeted to her followers.

Any thought on you and Pandora doing a cooking show together? SUR and Villa Blanca inspired recipes and wine pairings, hosting & home decor tips, and that sort of thing? You are an inspiration and role model, your fans want to see more of you! Stay healthy and safe!! #please pic.twitter.com/keWQkrx5q1

One Fan Inquires About ‘Lack of Diversity’ in Pump Rules Cast

Most of the comments on Lisa’s original tweet seeking ideas went unanswered. However, one fan’s question got Lisa’s attention AND a response, Us Weekly reports. Twitter user @Cathal_Farrell asked Lisa about the diversity issue on Pump Rules.

Fans have often complained that Pump Rules and Bravo shows in general aren’t diverse enough. Pump Rules fans decry a lack of people of color. They also find it odd that the cast doesn’t feature a gay person. This is especially jarring for fans given that SUR is centered in West Hollywood. Lisa and the cast also take part in the annual Pride Parade. So fans think someone like Lisa would have more non-straight people on Pump Rules.

Several of the women on the show do identify as bi, including Ariana Madix and Dayna Kathan.

Before Lisa could respond to the question, a fan jumped to Lisa’s defense. The follower wrote that SUR has “hundreds” of diverse staff members. However, the fan notes that the core cast of Pump Rules are actual friends.

Lisa agreed with the follower’s assessment by writing, “Exactly.” She elaborated that not everyone wants to be on reality tv shows. Or aptly, “the eye of the storm,” as she calls it.

That is so true…also not everybody wants to be in the eye of the storm.

If Pump Rules comes back, fans may get their wish for more diversity. With Bravo firing four stars, the show could endure a casting shake-up if Bravo renews it for Season 9. Stassi Schroeder, Kristen Doute, Max Boyens and Brett Caprioni were all let go in June for racially insensitive behavior.