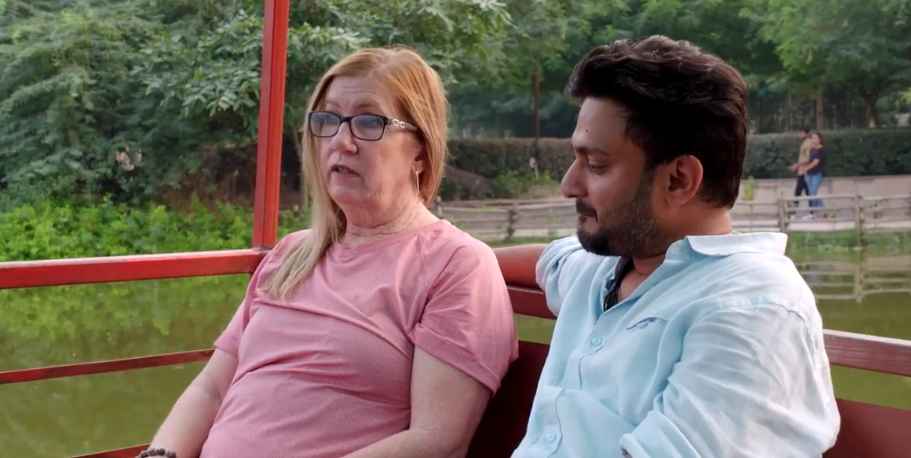 90 Day Fiancé: The Other Way stars Jenny and Sumit’s story has been dragging on for some time. In the latest episode, Sumit does finally provide proof of his divorce papers to Jenny. However, it is still unsure how long the divorce will take. The next worry is that society in India might shun the couple due to the significant age difference between Jenny, 62, and Sumit, 32.

90 Day Fiancé: The Other Way stars and Indian society

The problem stems from Season 1, when it is discovered Sumit is already in an arranged marriage, despite being with Jenny. While it is heartbreaking for her to hear this news, she decides to give her Indian boyfriend a second chance.

Jenny gave up everything to give Sumit this second chance. She quit her job in Palm Springs, sold her belongings and made the move. Jenny is determined to make her relationship with Sumit work.

There is one worrying aspect after Sumit and Jenny go for a boat ride with his friend. It turns out his friend is also in the process of getting divorced, but it will take four years. This shocks Jenny to the core and she asks him why it is taking so long. It turns out the friend’s wife wants a lot of money to release him from the marriage. Sumit swears he will not have the same problem.

Four years?! 😧 Jenny was not ready to hear that. Don't miss a new episode of #90DayFiance: The Other Way, Monday at 9/8c.

During the 90 Day Fiancé: The Other Way episode on Monday, Jenny and Sumit meet up with his brother. Unfortunately, the brother didn’t come bearing good tidings. He explained to Sumit and Jenny and their parents will never accept her, due to the age difference. Jenny is considerably older than Sumit and this is not acceptable.

Jenny had made it clear that she isn’t going anywhere and will stay with Sumit. However, there seems to be little to no hope his parents will change their minds. Culture and traditions are taken very seriously in India. Screen Rant quotes Asian Age, where it is important an Indian wife is younger than her husband. While many people believe age is just a number, Indian families think age can make or break a successful marriage in India. Romances, where the man is older, are acceptable. Meanwhile, Indian women can only marry after they turn 16. Many people would say at that age they are still children and hardly able to handle an adult relationship.

There is also the problem that Sumit would like to have children. Jenny is past the child-bearing age and already has a grown family. Their only remaining hope lies in an invitation to meet Sumit’s parents. It is difficult to say whether they will approve of their relationship.