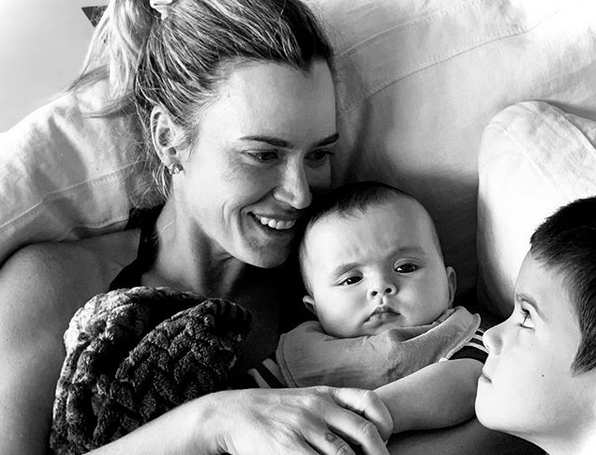 Last week, Real Housewives of Beverly Hills star Teddi Mellencamp was in the hospital with her daughter, Dove, for brain surgery. Teddi’s five-month-old daughter was born with lambdoid craniosynostosis, a rare condition that can affect brain development. Shortly after Dove was discharged from the hospital, Teddi’s son, Cruz broke his thumb and had to get a cast. The RHOBH star says that 2020 hasn’t been their year.

Teddi posted a video on her Instagram story on August 3 to document the family’s most recent trip to the hospital. In the video, she showed Cruz’s swollen thumb and explained that he fell off of his bike and broke his thumb. The 5-year-old was enjoying some time with his dad, Edwin Arroyave, when he fell. Between this incident and Dove’s surgery, Teddi’s family has spent lots of time in the hospital this year. In her video, Teddi joked, “2020, enough!”

According to the RHOBH star’s Instagram story, Cruz doesn’t mind his lime green cast. Despite a broken thumb, he hasn’t slowed down at all. Teddi made sure to get a waterproof cast so that Cruz could still do all of his favorite activities. When he got home, he showed off his cast to his older sister, Slate. The family decorated Cruz’s cast with pictures, signatures, and kind words to make the experience more fun.

RHOBH star Teddi takes care of her kids at home

When Teddi returned home, Slate surprised her with a photo board full of pictures the family took while Teddi was gone. Slate explained the pictures on Teddi’s story, saying, “We wanted to take pictures…when you were at the hospital so you wouldn’t miss anything.” The Real Housewives of Beverly Hills star was so excited to see everything the kids did while she was busy at the hospital.

Following Cruz’s bike accident and hospital trip, Teddi posted more videos on her story, showing that the whole family is back at home now. After back-to-back hospital visits, Teddi, Edwin, and their kids are taking some time to relax. Slate and Cruz have been playing together while Dove gets lots of rest after her surgery. Teddi’s story also featured a video of Slate reading a book to Dove.

Teddi and Edwin seem to be spending lots of time with their little ones while they recover. In addition to family time, the couple also made sure to squeeze in some time for themselves by getting a workout in. The RHOBH star posted videos in the gym.

Despite a couple of stressful weeks, Teddi and her family are safe and happy at home. Hopefully, they won’t have any more casualties in 2020. Be sure to check TV Shows Ace for more updates on your favorite shows.

’90 Day Fiance’: Are Corey And Evelin Secretly Married?
Kendall Long Speaks Out After Painful ‘BIP’ Exit
‘When Calls The Heart’s’ Erin Krakow Shows Her Support For Olivia Jade
Why Wasn’t Michael Allio Chosen As ‘The Bachelor’ 2022?
Jeremy And Jinger Vuolo Dragged For Using Daughters As ‘Props’