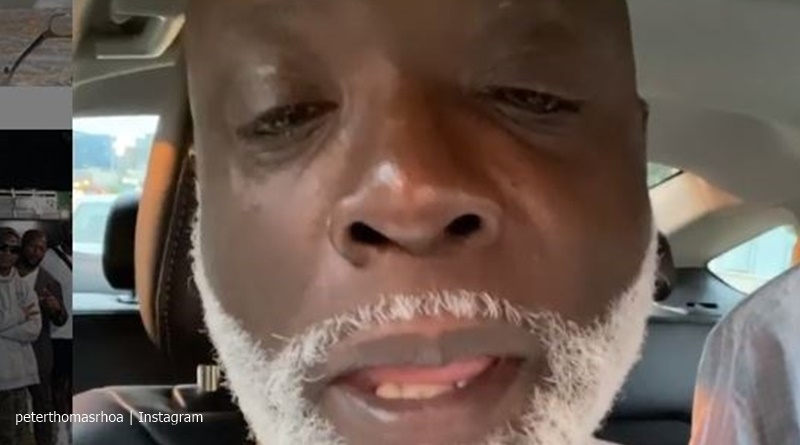 RHOA alum Peter Thomas tested for COVID-19 five times. Finally, the sixth test came back positive about eight days ago. Cynthia Bailey’s ex cautioned his fans about the illness and described it as extremely “painful.”  The old Real Housewives of Atlanta star spoke from his bed, where he feels very sore.

We reported in May, that Cynthia Bailey starred for quite some time on the Bravo show. Fans first saw her arrived on Real Housewives of Atlanta in Season 3 with Kandi Buress. Fans of the show saw her life as she first married and then divorced Peter. Now, Cynthia moves on and plans a wedding to Mike Hill later in 2020. In the meantime, Peter seems very sick with COVID-19 at the moment. Peter took to his Instagram on Monday and spoke out about his illness.

Peter shared a video, where he sounded in some pain. He captioned it with, “COVID-19 got me.” Fans seemed very sorry that Peter got sick before he realized the danger of not wearing masks and social distancing. One fan noted he flew on planes, which probably didn’t help. But, others worry because he can hardly get off his bed. Many RHOA fans urged him to get up and exercise to prevent his lungs from clogging up.

Fans saw Peter meeting people and not wearing a mask and it seems he now realizes the danger of that. During his video, he said that “people come up” all the time wanting photos “with no mask.” Plus they get all touchy-feely and “want to hug.” Thomas admits he took the photos, but just trusted he wouldn’t get the virus. “But, caught up to me.” Judging by his video, COVID-19 really feels very bad. So now, he urged his followers, “I’m going to tell you something, wear your mask, wear gloves and practice social distancing.”

The RHOA alum described the pain as “crazy.” And he also used the word “excruciating.” Elaborating, he noted, “It’s the most excruciating pain I could think of.” He also talked about his tummy cramping and he suffers from “chills all day and all night.” And, he faces a further seven days before he gets another test. However, he feels lucky in a way that he’s still well enough to stay home rather than in ICU. On top of that, he suffers from vomiting and diarrhea.

Peter ended by saying that his whole body feels painful and warned fans “it’s no joke. The pain don’t go away.” People noted that he seemed exhausted as the video ended. Naturally, many concerned RHOA fans send him their love, best wishes, and tips on getting better. Hopefully, Peter gets better soon and gives fans an update on his condition.