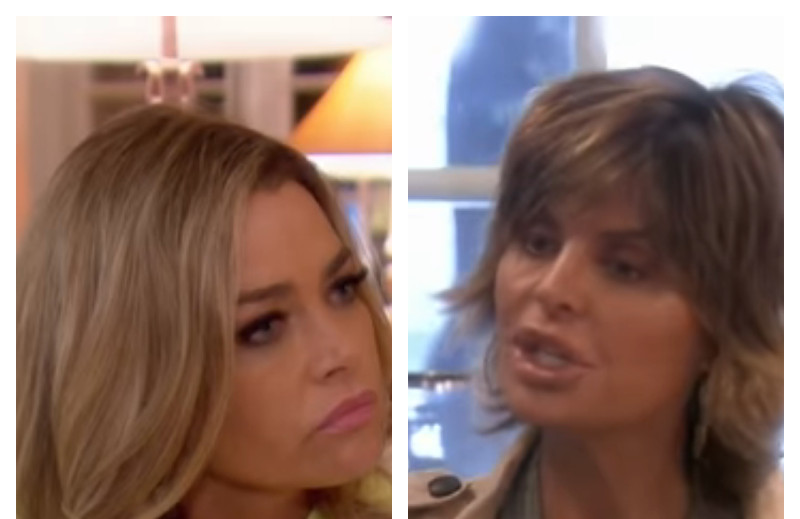 Brandi Glanville’s bombshell allegations about Denise Richards are taking over The Real Housewives of Beverly Hills. Brandi alleges that she was intimate with Denise during an overnight visit with Denise while she was on location filming a movie. As fans know, Denise married Aaron Phypers during Season 9 of RHOBH. Therefore, she is a “very married woman” and strongly denies the affair.

Additionally, Brandi says that Denise was badmouthing her co-stars. Brandi told them exactly what Denise supposedly said about them. Teddi Mellencamp takes serious issue with Denise allegedly calling her “pathetic” and saying she “lives in the shadow” of her famous father, John Mellencamp.

On this week’s episode of RHOBH, the fallout of the allegations continues as Lisa Rinna confronts her friend. The preview clip reveals that Denise has an idea of why Brandi would make up the allegations: attention.

While Denise is arguably a bigger star in Hollywood, Lisa Rinna is also an actress. She made her debut on the soap Days of Our Lives over 20 years ago. Traveling in the same circles, Lisa and Denise have been friends for just as long. As a result, Lisa speaks to Denise one-on-one to get her side of the story.

In a preview shared by Us Weekly, the friends chat over coffee in a hotel room during the cast trip to Rome. Denise begins by explaining how Brandi came to visit her on set in the first place. She says that Brandi asked her to guest on her Unfiltered podcast, but Denise was out of town. Instead, she invited Brandi to come on location and record the podcast there.

However, Denise doesn’t remember how long Brandi stayed, telling Lisa “Maybe a day.” But then she seemingly corrected herself by saying, “Maybe overnight.” (Brandi says she stayed two nights.)

Lisa then inquires if Denise has contacted Brandi to find out “What the f*ck” she’s doing spreading these rumors. Denise responded that she hasn’t talked directly to Brandi. Instead, she is handling it “another way,” implying legal action. (As fans may know, Brandi alleges that Denise served her with a cease and desist, which viewers will see come up later this season and at the RHOBH reunion.)

At that point, Lisa is skeptical of Denise’s denial, asking why Brandi would make it up. It’s simple, Denise says. “Shock Value.” Fans agree with Denise that Brandi is likely just trying to get her full-time role back on the show. She left RHOBH after Season 5, though she makes guest appearances often.

The Melrose Place alum also asks Denise about Brandi’s claim that she was badmouthing everyone. Denise again denies saying anything negative. However, she asserts that Brandi told Denise negative things the other women were saying about her. To that, Lisa hones in on Denise’s admission to speaking with Brandi before the trip to Rome.

Twitter user @queensofbravo shared a clip of the confrontation in the upcoming episode.

#RHOBH Preview: Denise Richards puts it all out on the table for 20-year friend, Lisa Rinna. This is interesting… pic.twitter.com/D8LT5mPDny

So far, Brandi’s allegations amount to a bunch of she said, she said. In fact, Denise drops a bomb of her own on her RHOBH co-stars in the upcoming episode. A preview that aired over the credits on the July 29th episode. It teases that Denise isn’t the only one Brandi has allegedly been intimate with.

Denise tells the other women that Brandi told HER that she’s slept with someone else on the RHOBH cast.

Any guesses on which RHOBH star Denise names this week? Tell us in the comments.