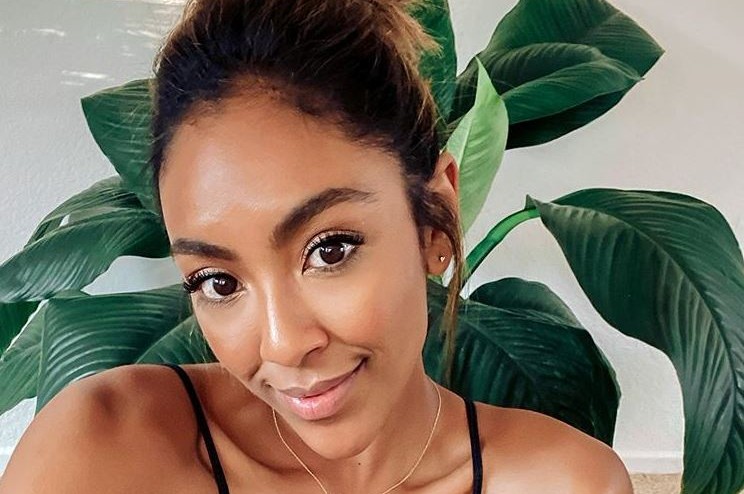 Could it really be happening that Clare Crawley is no longer The Bachelorette? Fans and even spoiler guru Reality Steve seem to think there is more and more validity to the claims. Everyone is saying Tayshia Adams is replacing Clare and is already quarantining at the resort in California. Now, to add more fuel to the fire, producer Julie LaPlaca commented on Tayshia’s last social media post.

Three days ago Tayshia went to Instagram to share a mysterious post. Many believe her pic and quote prove she is taking over as The Bachelorette. The photo shows a shadow pic of Tayshia. The picture is stunning even not being able to see her face. She captioned the photo, “The eye is always caught by light, but shadows have more to say”

Many believe this means she is coming out of the shadows to take over. And, producer Julie LaPlaca also commented on the picture. She didn’t say much, but it was enough to have many fans convinced she is the new Bachelorette. Julie commented, “🖤🔥🖤🔥🖤.” The Bachelor Nation Instagram account also commented with, “🙌🙌🙌.”

Is this really proof Tayshia is taking over? Fans comments seem to indicate many believe it. And, they are all here for it. Tayshia has been a fan favorite since she appeared on Colton Underwood’s season of The Bachelor. Many are commenting and offering congrats to her and hoping all the rumors are true.

Is Clare really out?

At first, Reality Steve believed the rumors were absurd and not possible. However, now he is saying there is a lot of validity to the speculation. The rumors first began over a post on Reddit. It was being said Clare wanted out to be with contestant Dale Moss.

To add even more to the speculation, pal Demi Burnett says she tried to contact Tayshia. However, the text went as “green” indicating her phone is possibly off. Demi says she has no inside information, but many believe she must know something and of course not at liberty to disclose it.

In the meantime, there has been no announcement from The Bachelorette producers or host Chris Harrison about the changes. It also remains unknown the true reasons Clare is stepping down if indeed it did happen.

One thing is certain, the show had scheduled a fireworks show for Sunday evening and it still went on as planned. So, the question remains, who were the fireworks for? Were they for Clare or for Tayshia?

‘Welcome To Plathville’: Why Isn’t Hosanna Plath On Her Family’s Show?
Hallmark’s ‘South Beach Love’ Based On Caridad Piñeiro Novel
Separation Over, Isabel & Jacob Roloff Back Together
‘Welcome To Plathville’ Preview: Max Calls Moriah Out On Her Risqué Clothing
‘DWTS’: JoJo Siwa’s Dance Partner Injured – Are They Quitting The Show?