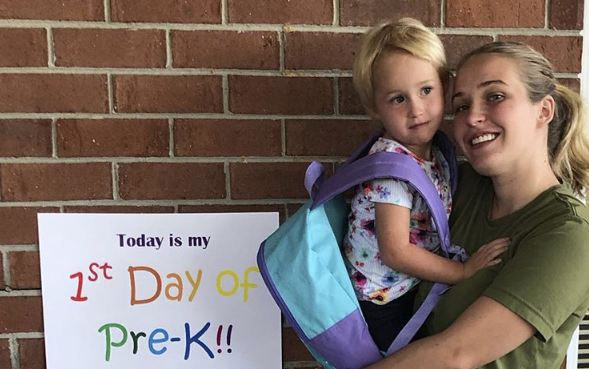 Here Comes Honey Boo Boo fans remember Anna as the oldest of Mama June’s daughters. Anna’s oldest daughter, Kaitlyn, was born in the show’s first season. Kaitlyn recently celebrated her 8th birthday. Anna eventually split from Kaitlyn’s father and went on to marry Michael Cardwell. The couple had Kylee before splitting up in 2017.

It can’t be easy starting school this year, so we wish the family the best! Hopefully, Anna will post more adorable pictures of her daughters as the school year continues. We personally think this one is so sweet:

Here Comes Honey Boo Boo had lots of potential. However, TLC executives canceled the show in 2014. Rumors circled around the family matriarch, Mama June. Several reports said she was dating a convicted child molester. Mama June continued to deny the rumors, but TLC made a firm decision and canceled the show anyway. Anna alleged that she was one of the man’s victims. This certainly added to the family drama. Fans can imagine that wasn’t an easy situation for the family to navigate.

Afterwards, Mama June launched her own show, Mama June: From Not to Hot. It premiered on We TV in 2017. The show follows Mama June as she climbs toward her weight loss goals and tries to turn her life around. Mama June’s daughters, Alana and Lauryn, also star on the show.

Here Comes Honey Boo Boo centered on Alana. However, she seems to be living a relatively normal life these days. She reportedly loves going to her new school and even has a boyfriend. In a Q&A with fans, she described him as an amazing guy. “We’re really happy.” she said.  Alana seems to be doing so well these days, especially since things aren’t so great for Mama June.

Right now, Mama June is dating Geno Doak, who definitely has a sketchy past. Doak has a criminal record which includes burglary, theft, criminal property damage. In 2019, both Doak and Mama June were arrested for felony drug possession in the state of Alabama. Do you think it’s too late for Mama June this time?

It’s been a long, chaotic journey for the Shannon family, but fans really hope Anna and her girls will have a good life from here on out. Follow Anna on Instagram at annamarie35 to see updates and pictures of her daughters. Remember to follow TV Shows Ace on social media and to regularly check back with us for news and updates. We’re always happy to fill you in on anything you missed!