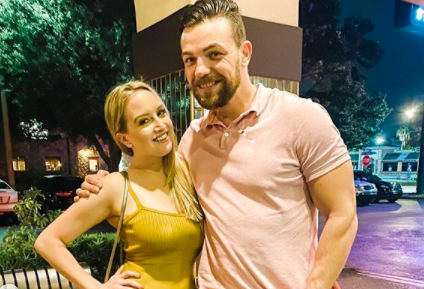 90 Day Fiancé: Happily Ever After star Andrei Castravet cannot seem to make peace with his wife Elizabeth Potthast’s family. On the August 2 episode, Andrei nearly got into a physical fight with his brother-in-law, Charlie, for prying into his past while visiting his family in Moldova.

The drama began in Moldova

The drama between the two men began shortly after Elizabeth’s father (Chuck) and brother (Charlie) arrived in Moldova to meet Andrei’s family before the second wedding. Chuck and Charlie instantly began asking questions about Andrei’s past employment in Moldova.

The 90 Day Fiancé star then revealed that he was a police officer and detective before he left for Ireland, where he met Elizabeth while working as a bouncer.

Chuck and Charlie could not leave it at that. They had to press Andrei even further that evening at dinner. Charlie was sure to ask Andrei’s brother, Radu, if he really served on the police force? Radu said that yes Andrei was a cop for one year. To make matters worse, Chuck even went on to ask Andrei’s family members if it was normal in Moldova for the husband not to work?

All of this obsessing over his past and current employment really angered Andrei.

A post shared by Elizabeth Potthast Castravet (@elizabethpotthast) on Jul 19, 2020 at 4:44pm PDT

According to InTouch Weekly, the latest episode starts with Andrei asking Elizabeth for more details about what happened at their previous family dinner. He specifically wanted to know why there were comments made about them potentially not getting married a second time.

Andrei asked, “Did you change your mind [about the wedding]?” Elizabeth explained that she just wants everyone to be happy, but she was once again stuck “in the middle of you, my dad [Chuck Potthast] and Charlie.”

Finally, Andrei came to the conclusion that they shouldn’t worry about Chuck and Charlie’s opinions if the setup works for them. The couple has a comfy life and there is no reason for them to switch if they are happy.

But, despite trying to keep Chuck and Charlie’s opinions out of their heads, Andrei told Elizabeth that Charlie keeps asking “stupid questions” only to irritate him. Elizabeth tried to defend her family as just trying to get to know him and a little overprotective of her. But, when the 90 Day Fiancé pair went to grab dinner with Andrei’s friends and Chuck and Charlie, things got heated once again.

Tensions rise at the restaurant

At the restaurant, Chuck and Charlie still wouldn’t quit digging into Andrei’s past. They even took the opportunity to question Andrei’s friend from Ireland about why he ever left Moldova.

This was the last straw for Andrei. He was beyond angry. He felt all of their questions were implying that he left Moldova only to find someone for a green card.

Charlie then said he was just trying to learn more about Andrei. But Andrei fired back saying, “I’ll talk to you outside.”

Finally, Charlie asked his sister to speak up and defend him, but Andrei took over and told him to “shut the f–k up.” The two men then jumped out of their seats and got in each other’s faces.

Will the two families ever find peace?

What do you think of Andrei’s reaction to Charlie and Chuck’s questions? Let us know what you think in the comments below. Be sure to watch new episodes of 90 Day Fiancé: Happily Ever After? on TLC on Sundays at 8 p.m. ET.