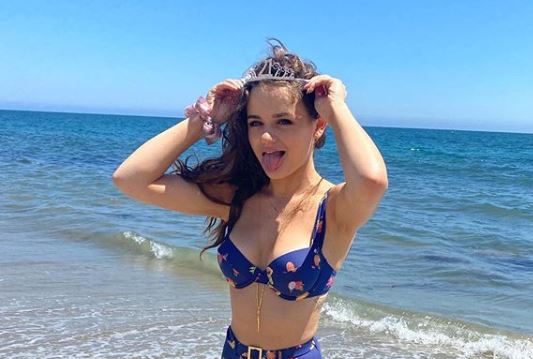 The Kissing Booth rumors are really flying right now. The movie has already released two and now a third one has been revealed. Life & Style Magazine shared about how Joey King and Taylor Zakhar Perez have rumors flying that they could be more than friends. Taylor was an addition to The Kissing Booth 2.

Romance rumors are coming out about Joey King and Taylor Zakhar Perez after have been seen hanging out again. Not long ago, the two shared on Instagram that they got the COVID-19 test just so they could hug each other once again. This was on Joey’s Instagram Story.

Now, The Kissing Booth stars spent the weekend together. They were along with other friends, though. Taylor Zahkar Perez posted pictures on Instagram. He looks pretty cozy with Joey King in one of those pictures too. Check them out below.

Taylor’s sister Maria was along on this trip as well. Joey and she seem to be getting along great. That is great news if they are actually dating. So far, Joey and Taylor aren’t admitting to a thing, though.

Joey King actually dated someone from The Kissing Booth before, but they have split. After the first film, she dated Jacob Elordi for a bit. Things were great for the couple, but it didn’t last. At the time, she told Bello how they hit it off.

“Before long I started to realize, ‘Hey, I think I kind of like this person!’ It was such an interesting experience meeting your boyfriend on set because you spend so much time together and become so close so fast. We were spending 17 hours a day together, and all of us would hang out after work and watch movies together and stuff. It was great.”

Sadly, things didn’t last, but maybe she has found love once again thanks to this movie franchise. Whatever is going on, they enjoy spending time together and are sharing it with the world.

It may have been a bit odd filming together for the second movie, but they were able to make it work. It sounds like they had a lot of fun together before they split in 2018.

Don’t miss watching the first two The Kissing Booth on Netflix. The third installment will be coming out, but an exact date hasn’t been revealed yet. For now, fans are waiting on that and confirmation that Joey King and Taylor Zahkar Perez are more than friends.