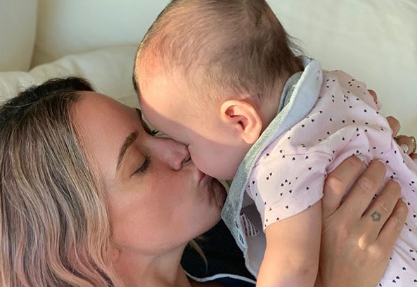 Teddi Mellencamp of Real Housewives of Beverly Hills spoke about her daughter’s resilience after having surgery at such a young age.

Originally she thought Dove would spend two days in NICU and the four to five more days in the hospital. She happily reported they got to leave early because the swelling went down. She said Dove passed all her markers.

The reality star said, “I am so grateful for so many things and feeling really blessed. We love you so much baby Dove and know you are going to live whatever life you dream of.”

It’s crazy how resilient kids are. Dove is going into Day 4 post neurosurgery with both eyes open. The swelling went down, she passed all her markers and we have been sent home much earlier than expected. I am so grateful for so many things and feeling really blessed. We love you so much baby Dove and know you are going to live whatever life you dream of. 🕊 #craniosynostosis

A post shared by Teddi Mellencamp Arroyave (@teddimellencamp) on Aug 2, 2020 at 2:09pm PDT

Others Shared Love For Teddi Mellencamp And Dove

According to People, the baby has, “a very rare type of non-syndromic craniosynostosis and occurs when one of the lambdoid sutures at the back of the head fuses before birth.” When they found out, Teddi posted how she and her husband were dealing with it. She said they both had faith to get them through and knew it would be okay. She admitted it was a struggle. Mellencamp said, “they’re saying her face is gonna be really swollen after the surgery. She’s not gonna know what happened. The reality star went on to say it was a time to just put one foot in front of the other.”

On the episode that just aired of RHOBH, Teddi cried over the news of her daughter’s ailment. Teddi said they carried a lot of guilt over the diagnosis. She said she was getting scared and just wanted what was the best for her kids.

Teddi Mellencamp and Dove received lots of love on social media. Kyle Richards posted, “love you so much baby Dove.” Co-star Garcelle Beauvais posted a prayer hands emoji.  Fellow Bravoite Stassi Schroeder posted a heart. Teddi’s husband Edwin Arroyave posted about his wife, “such a blessing to our family for taking this on like you have. You continue to amaze me. Love you.”

Before the surgery on the show, Mellencamp shared that she had faith the surgery would work. She said, “I’m so looking forward to thing being not an unknown anymore.”  Teddi Mellencamp posted on her story, “it’s a big day. We put clothes on but that was exhausting so now we need to nap.” She posted a picture of Dove sleeping with her bandaged head.

She shared footage of the two napping together. In her earlier post she shared a video of them listening to Taylor Swift. Teddi posted they had, “so much gratitude to her amazing surgeons Dr. Danielpour and Dr. Urata and all the loving nurses that will continue to help us care for her as she recovers.” Fans will continue to watch Dove’s recovery through social media and wish her well.

‘BIP’ Carly Waddell & Evan Bass Seen Together, Headed Towards Reconciliation?
Adam Busby Rolls Eyes As His Baby Boy Licks His Knee
‘Below Deck Down Under’: Where Can You Watch It?
‘Stunner’ Jill Dillard Shares Photos As She Models New Swimsuits
‘Below Deck Med’ Hannah Ferrier Shares Rare Glimpse At Her Anxiety