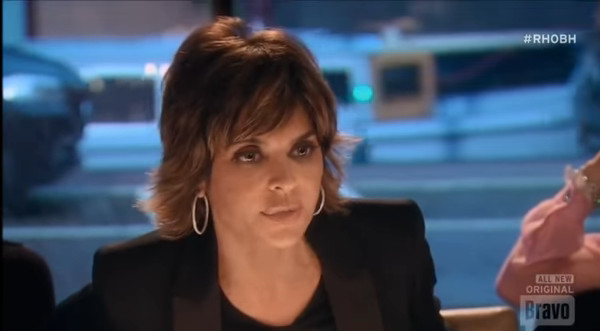 The Real Housewives of Beverly Hills star Lisa Rinna is not feeling sympathetic toward Denise Richards. Mrs. Harry Hamlin took to Instagram over the weekend to remind fans that she’s had some tough seasons, too. As viewers know, much of Season 10 of RHOBH involves Denise feuding with her co-stars for one reason or another.

Denise Getting It From All Sides This Season

There are several different feuds playing out on RHOBH this season. All of them involve the Wild Things actress. The first feud revolves around the other ladies feeling like Denise is ‘mom-shaming’ them.

The other women tried to “resolve” this issue with Denise over. And over. And over. Denise was already done with the issue, so she often chose to leave rather than continue arguing in circles. Her refusal to hash it out led to more bad feelings amongst the cast.

Then on episode 11, former RHOBH star Brandi Glanville had a shocking allegation about Denise. She told Kyle Richards and Teddi Mellencamp that she had an intimate encounter with Denise, unbeknownst to Denise’s husband. Denise continues to deny any affair.

While spilling that tea, Brandi also told the ladies some of the negative things Denise supposedly said about them. Denise allegedly slammed RHOBH’s Erika Jayne as a “cold b*tch.” Furthermore, Brandi alleges that Denise said Teddi is “boring” and lives in the “shadow” of her famous father, John Mellencamp.

With all the drama revolving around Denise, she is having a pretty tough season. However, Lisa Rinna wants fans to know that she hasn’t always had it easy on RHOBH.

The Days of Our Lives actress joined the Bravo show for Season 5. In recent seasons, she’s been at the center of the drama. It was Lisa Rinna who convinced Kyle and Dorit Kemsley that former RHOBH star Lisa Vanderpump sold a story about Dorit to the tabloids.

In prior seasons, Lisa Rinna has had issues with Dorit, Kim Richards and Yolanda Foster. Lisa Rinna’s accusation that Yolanda was suffering from Munchausen syndrome, not Lyme Disease, was part of why Yolanda quit the show.

During the episode airing July 29, Lisa Rinna made reference to the situation with Yolanda. She told producers in her confessional that she didn’t want to be the one to out Brandi’s affair allegations. One word why not, she said. “Munchausen.”

So, Lisa Rinna isn’t feeling much sympathy for Denise Richards having a hard season. She took to Instagram to remind fans that she has had her share of “tough seasons.”

Lisa Rinna posted a series of images to her Instagram Stories. Each image was a screenshot from one of her arguments with her RHOBH co-stars. Some of the photos include reference to the following dramas:

Fans Are Not Here For Lisa’s Claim

RHOBH fans don’t buy Lisa Rinna’s claim that she’s had some “tough seasons.” Twitter user @StoneBravoGuy tweeted her first slide, which is an image of her with tears coming down her face.

The RHOBH fan called Lisa Rinna out for her previous behavior, during her supposed “tough seasons.”

Were these “tough seasons” you speak of when you tried to make Kim’s addiction storyline your own or when you made Yolanda’s illness about you? #RHOBH pic.twitter.com/JbuOGKppVO

Many other fans chimed in with examples of their own. One fan wrote, “Remember when Rinna texted Kim that she was gonna kick her a**?”

Another fan wrote that Lisa Rinna “miscalculated” that fans would side with her and not Denise Richards.

The next episode of RHOBH will bring more drama. In the preview clip, Denise says that Brandi told HER that she’s been intimate with “some of the people from this group,” per People.

The Real Housewives of Beverly Hills continues Season 10 Wednesdays on Bravo. The season finale will air on August 26, 2020.

Netflix ‘Another Life’ Season 2: Release Date, Trailer, What We Know
‘BIP’ Brendan Morais Responds To Alleged NordicTrack Firing
Jinger Vuolo’s New Post Has Fans Worried About Her Kids: ‘Are They Ok?’
‘Welcome To Plathville’ Olivia, Kim And Barry Have A Serious Talk
‘Bold And The Beautiful’ Weekly Spoilers: Steffy Hangs With Liam, Sheila Has A Partner In Crime