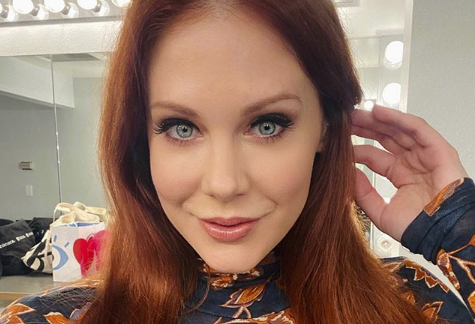 You probably remember the stunning Maitland Ward from her days on Disney’s Boy Meets World. She played the sensitive and cool Rachel McGuire in the later seasons when the main cast entered college. Others remember her as Jessica Forrester from The Bold and the Beautiful. No matter where you know her from, it’s hard to forget Maitland Ward. These days, her line of work looks a little different.

So happy and honored to be the #avnstar of the month ⭐️ Make sure to check out my @avn_magazine cover and 22 page spread! Interview: @danmillerla / photography: @keithryanphotography / Hair & Makeup: @makeupgrrl13 / Styling: @bethee143

Being the cover girl isn’t all. Readers will see Maitland in a 22-page spread with the photographer, Keith Ryan.

“Much thanks and gratitude to AVN for putting me on the cover of the August issue – it is such an honor!” says Maitland. “Keith Ryan is a fantastic photographer and we had a great time shooting this beautiful cover and layout… the 22-page spread inside of the magazine is incredible!”

It all began when Maitland started posting nudes on her Snapchat and Instagram pages. From there, she created her own Patreon for adult content. It seems plenty of old fans are more than willing to pay for her content. She’s earned quite the following as her new career grows.

Maitland says she was worried about being typecast in Hollywood and that the adult film industry saved her.

So far, Maitland says her former Boy Meets World costars have been pretty supportive of the career change specifically Trina McGee. Trina played the role of Angela Moore on the show from 1997-2000. It certainly can’t be an easy jump, so we’re glad others are there to support her. Maitland also says she’s much happier these days and earns much more money than she ever did with Disney.

A few months ago, she posted an adorable throwback photo of the old BMW gang:

20 years ago today we aired the final episode of #BoyMeetsWorld. 😢 So many amazing memories I had the honor of experiencing with all of my incredible co-stars. Go to my Insta story for more memories. HUGE THANK YOU to all of my amazing BMW fans out there! 🙏 Comment & let me know what your favorite BMW moment was!

“Many expected my rise in the adult world, including many in the adult world itself, to be a flash in the pan. It was a stunt. I wasn’t serious. But that’s what makes this story different: my genuine love for adult performance and for colorful cinema,” she writes in an op-ed for The Daily Beast.

And Maitland is certainly successful in her new industry too. She’s won several awards, including the 2020 AVN award for Best Supporting Actress for the adult film Drive. We have no doubt she’ll be quite successful. Who knows where she will appear next? You can follow her Instagram at maitlandward to see what projects she’s working on these days.

If you liked this story, make sure to follow TV Shows Ace on Facebook. We’ll be the first to fill you in on all the latest celebrity TV news. Stay tuned for more!