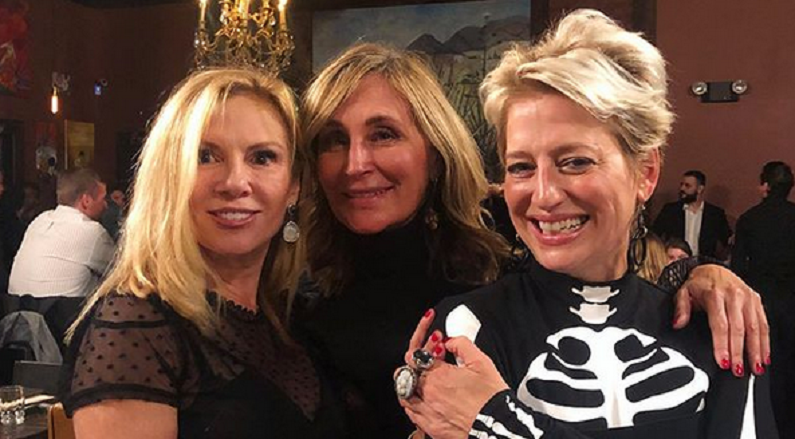 Ramona Singer is having second thoughts about spreading gossip about Leah McSweeney’s mental health. She penned an emotional apology to her RHONY co-star. Leah is the newest kid on the Bravo block, and she already found herself on Ramona’s bad side. On Thursday night’s episode, Leah learned that Ramona has been talking about her mental health behind her back.

First, Ramona revealed to Sonja Morgan that Leah was diagnosed with bipolar disorder. Sonja didn’t get why Ramona was sharing this information with her. Meanwhile, Leah found it “repulsive as f***” in a confessional during the episode. Now, Ramona is apologizing for talking about Leah’s mental health.

The Real Housewives of New York star revealed she “absolutely” regrets talking about Leah McSweeney’s mental health. After the episode, she appeared on Watch What Happens Live with Andy Cohen. The 63-year-old expressed regret for talking about Leah’s bipolar II disorder. Andy asked Ramona if she has regrets about gossiping about Leah. The reality shared her regret and commended Leah for sharing her story with the world.

“Absolutely,” Ramona said, as quoted via People. “I actually feel that Leah, the fact that she was able to write this article showed so much courage and guts and I just wish her the best on her journey.”

The Bravo personality referred to the 2016 Hyperbae essay that Leah wrote, addressing her mental health. Later, Ramona took to Twitter to claim that she “never” meant “to shame Leah about her mental health issues.”

“I understand it’s her story to tell,” Ramona tweeted. “Takes a lot of courage & strength for her to go public in an article about her struggles, which I admire. I only wish her well & want to help support her in the right way.”

It was never my intention to shame Leah about her mental health issues. I understand its her story to tell. Takes a lot of courage & strength for her to go public in an article about her struggles, which I admire. I only wish her well & want to help support her in the right way.

But Leah was “repulsed” with Ramona during Thursday night’s episode of RHONY. She found out through Sonja, who called her and told her. Ramona was already upset with Leah for her drunken behavior at her birthday party. She told Sonja that she heard the fashion designer was bipolar. Then she had a revelation about Leah’s behavior.

Ramona Singer hoped her tweet would lessen the blow. However, many RHONY fans felt that Ramona’s apology was not genuine. She didn’t include the words “I apologize” or “I’m sorry.” Others felt that she should apologize directly to Leah.

“This seems like a backtrack due to the blowback from last night’s episode,” one fan tweeted. “Mental health issues shouldn’t be used to shame a person for how they’re acting.”

“Even for you that was a low,” another viewer wrote. “This isn’t an apology by the way.”

Ramona doesn’t think she has a drinking problem

The RHONY star previously slammed the drinking habits of some of her co-stars, including Leah McSweeney. Then she addressed it again on Instagram, as per Reality Blurb. Ramona responded to a user who suggested that she’s the only one without a drinking problem.

“You seem to be the only one without a drinking problem,” the fan wrote on Friday, July 31.

“Appears that way,” Ramona agreed, according to a screenshot shared by Comments by Bravo.

Some may call it a drinking solution? #CommentsByCelebs #RHONY

Sonja jumped into the conversation by responding, “Hahaha” and including a double pink heart emoji.

What are your thoughts on Ramona Singer’s apology? Do you think it was genuine? Sound off below in the comments section.