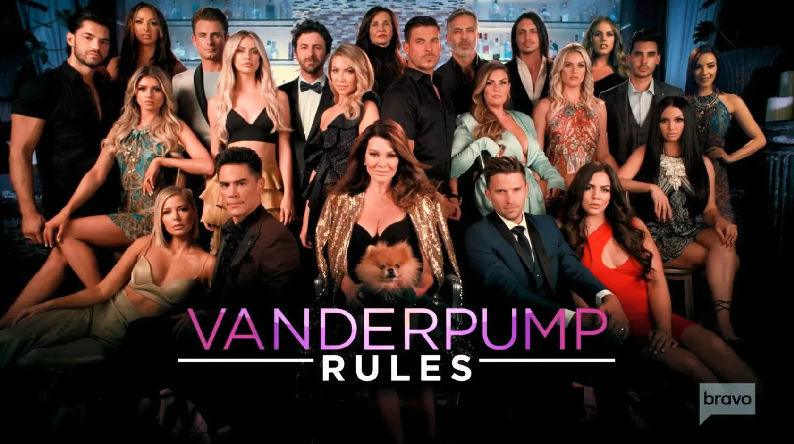 It’s time to put those glasses down. Vanderpump Rules Season 8 could be its last season. Rumors are swirling that Bravo could cancel the show, even after the firing scandal that kicked off last month. Either way, it’s not looking good for the series.

Even fans noticed that the Season 8 season finale felt more like a series finale. And that was long before the firings happened. The final episode showed the cast fighting and going their separate ways. An insider revealed that Bravo is “less likely” to renew the series. Even Scheana revealed that filming for Season 9 is still up in the air.

Vanderpump Rules is at “risk of being canceled” after firings

Was Season 8 the last time viewers saw Vanderpump Rules? According to a new report via Us Weekly, the network is “less likely” to renew the hit series following the firings of Stassi Schroeder, Kristen Doute, Max Boyens, and Brett Caprioni. However, another insider claimed filming is on hold due to the coronavirus pandemic. Lisa Vanderpump’s restaurant, SUR, remains closed.

“VPR chances of getting picked up are looking less likely,” the insider told Us Weekly on Friday, July 31.

Another insider said that VPR is not canceled. Rather, the producers have to find a way to film safely due to the COVID-19 pandemic. In June, Bravo fired Stassi, Kristen, Max, and Brett for their racist actions and comments. Former VPR co-star Faith Stowers shared her experience as being the only Black woman on the show.

The remaining cast members of Vanderpump Rules haven’t heard anything about the upcoming ninth season. There hasn’t been word on a start date for production, according to a source.

“Cast members still have not heard anything from Bravo regarding picking back up filming [Vanderpump Rules] again,” an insider told Us Weekly back in July. “They would have been filming this summer.”

While SUR opened up briefly a few weeks ago, it shut down again due to the increased cases in the area.

Stassi and Kristen will not return for Season 9

Vanderpump Rules fans will miss the return of Stassi Schroeder and Kirsten Doute. Some of them have asked the network to bring them both back. Stassi issued an apology via Instagram writing, “I am grateful for the people in my life that continue to check me and push me to evolve into a more educated person.”

Kristen also apologized for her past actions in a lengthy statement on Instagram. The He’s Making You Crazy author promised to “do better. I have to do better.”

Max Boyens and Brett Caprioni also issued their apologies as well. But it’s Stassi and Kristen who fans will miss the most. Most of the newcomers weren’t well-received in Season 8, leading fans to wonder about the show’s future.

Scheana Shay confirmed that production for Vanderpump Rules Season 9 hasn’t started yet. She spoke out after rumors swirled that she quit the show after her move to San Diego with boyfriend Brock Davies, as per Us Weekly.

“Y’all just bc I’m moving now, does NOT mean I’m quitting the show,” Scheana tweeted. “We aren’t filming right now. SUR/LA is closed. I’m wasting so much $ on rent and I’m lonely all the way out in PS. It just makes sense. Once work opens/picks back up, I will too have an apt in LA! [sic]”

Vanderpump Rules was a hit reality show that followed the employees at the West Hollywood restaurant during the summer months. The series made its debut in 2012 and became a massive hit since. The coronavirus pandemic led the cast to film a virtual reunion for Season 8 back in April. It was a spinoff of The Real Housewives of Beverly Hills, which Vanderpump no long appears on.

What are your thoughts? Do you think Vanderpump Rules will get canceled? Sound off below in the comments section.