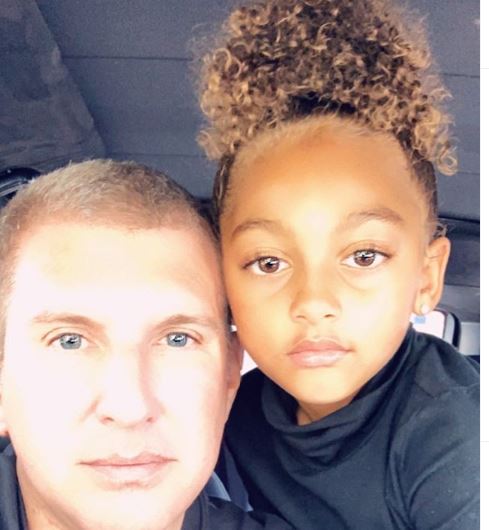 Last night on a new episode of Chrisley Knows Best, fans saw Chloe Chrisley begging for a phone at the age of 7. Todd didn’t want to give her one, but Nanny Faye gave in and handed over an old phone she had. Honestly, she didn’t see a problem with Chloe having a phone already.

What did Chloe Chrisley do with her phone?

Chloe Chrisley got this phone from Nanny Faye. You could tell it was an older iPhone. Well, Nanny forgot to take things off the phone. It turned out that Chloe actually ordered a dollhouse on the phone and it was delivered to the house.

Todd found out about this phone and was pretty upset. He explained that if he wanted Chloe to have a phone that he would have gotten one for her. Todd at first thought that Nanny Faye ordered the dollhouse, but that wasn’t the case. Chloe Chrisley is just smarter than they give her credit for.

Get ready, y’all! America’s first family is coming back for Season 8 and all I can say is buckle up for another fun ride. #ChrisleyKnowsBest

Chloe actually had to return the phone and the dollhouse. She got to keep the doll, but it wasn’t free. Instead, she had to do some babysitting to pay for it. Chloe is too young to watch another little kid, but she got to watch Nanny Faye’s dog to earn the money. Nanny also learned a great lesson, which is to have things she buys the kids sent to her house and not Todd’s home.

When should she get her own?

At this time, Todd and Julie feel like she shouldn’t get a phone until around 13. They may decide to give in early though. Regardless, they agree with fans and won’t be getting Chloe Chrisley a phone at the young age of 7.

Chloe Chrisley has been spending a bit of time with her dad Kyle, but he isn’t the one who will make these decisions. Todd and Julie have custody of her and will be the ones who choose if she gets a new phone or not. You know her older siblings Chase, Savannah and Grayson will also have an opinion based on what age they were able to get one of their own. They are all a bit older than her, though and times have changed over the past few years with technology.

Fans on social media agreed that Chloe doesn’t need a phone just yet. They feel like she should be older.