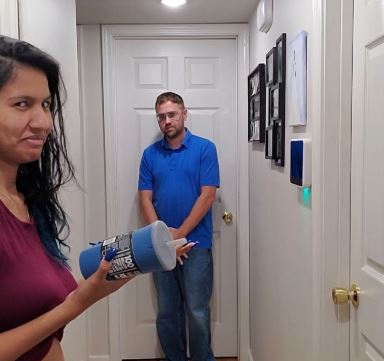 90 Day Fiance stars Paul and Karine always have some kind of drama. Now, it turns out that Paul is saying that Karine is missing along with their son. Fans are worried about her and want more details. The Blast shared what they know about it so far.

Paul Staehle claims his wife Karine Martins is missing now. He rushed to his Instagram Live to share with fans. Part of this is because people know his wife and might recognize her and see her. Paul is worried about Karine and their young son who is also with her allegedly. He begged people to reach out to officers if they saw her.

At this time, nobody knows if Karine is really missing with their son or if she just wanted to get away from Paul. She might have just left and not told him where she was going. Their relationship has never been simple.

When it all went down, he said “We were doing a call, I look over, I see her talking to a Brazilian lawyer about child support and divorce. I asked her what’s going on with this.”

Sheriff is attempting to locate karine her and pierre are MIA if you see them contact law enforcement. SHERIFF CAME HERE I AM NOT SURE AS TO WHY THEY DID NOT TELL ME

What is going on with these two?

Paul and Karine have been fighting a lot lately. They have split more than once from each other. Just this week Paul was talking about how they had a fight and she wanted to leave. She may have decided to just go for it.

Recently, Paul went to the hospital and found out that he has an STD. He says he hasn’t been sleeping around at all. Paul says that Karine has had their son around other men while she was drinking. She is accusing him of being aggressive towards her.

It really sounds like these two have a rough relationship. Hopefully, Paul will share soon that his wife Karine and their son have been found safe. Fans are just worried to hear about how she is doing and that all is well. Paul does a great job of sharing more than he really should on social media, so you know he is going to speak out.

Don’t miss new episodes of 90 Day Fiance on TLC. The episodes we are seeing now are from a while ago. So, this drama won’t be playing out on any new episodes that are coming up soon. You never know if the TLC cameras have been following them around now, though.

Todd Chrisley Issues Statement On Lindsie & Will’s Divorce
Paris Hilton Joining ‘RHOBH’ Would Be ‘Hunky Dory’ With Fans, But Will She? Kathy Spills All
Josh Duggar’s Arrest May Not Be The REAL Reason ‘Counting On’ Is Over
Thomas Jacobs Looks Back On His ‘Bachelorette’ Journey
Meri Brown Gets Cryptic About ‘Being Broken,’ Is She Alright?