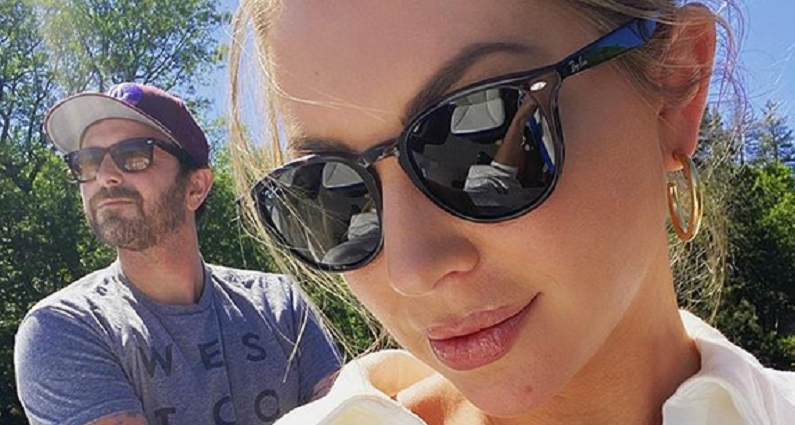 As TV Shows Ace previously reported, Stassi has made a slow return to social media. Last month, Bravo fired the television personality for her past racist comments and actions.

Meanwhile, her fiancé Beau has been providing followers with updates. He just showed an intimate photo of Stassi revealing her ever-growing baby bump. The new photo shows her wearing lingerie and fans are struck over her beauty. Read on for more details on Stassi and Beau’s anniversary.

As per Page Six, Beau Clark celebrated his engagement anniversary with Stassi Schroeder. He revealed a lingerie photo from her intimate pregnancy photoshoot. The photo shows the former VPR star in a white lace bra and matching underwear. Stassi looks down and smiles at her ever-growing baby bump. Some would say she’s glowing.

“Happy Anniversary to my Sweets!” Beau captioned the photo. “One year of Engagement! Can’t wait to be a parent with you.”

Stassi commented on Beau’s photo with the following, “I love youuuu. We may not get to have our fancy a** wedding this year but I get to carry your little alien baby, so we goooood.” She also included a series of red heart emojis.

Happy Anniversary to my Sweets! One year of Engagement! Can’t wait to be a parent with you 🥰

Beau proposed to Stassi in July 2019 at the Hollywood Forever Ceremony. The couple went mausoleum shopping, but Stassi got more than she bargained for. Bravo documented the touching moment on Season 8 of Vanderpump Rules.

However, the couple’s wedding plans are on hold due to the coronavirus pandemic. Stassi’s pregnancy was leaked through the press just days after her firing. Her rep confirmed to Us Weekly that she’s due to give birth early next year. The couple confirmed Stassi’s pregnancy by revealing they’re having a girl.

As per The Blast, Vanderpump Rules fans supported Beau’s latest Instagram post. Most of the compliments were about Stassi Schroeder.

“Omg she is literally stunning pregnant,” one person wrote.

Even Stassi’s ex-boyfriend, Jax Taylor, left a comment, according to the report. However, it’s not clear what he wrote.

Stassi Schroeder relied on Beau during this time

The couple has been spending a lot of time together since the Bravo firings. They’ve been taking road trips and celebrating these milestones along the way. Beau and Stassi have crossed a lot off their list lately. In the wake of the scandal, Stassi is fortunate to have Beau by her side.

“Beau has been her rock throughout all of this and she’s been grateful to have her support,” an insider told Us Weekly back in June. “Professionally speaking, Vanderpump Rules and her podcast were her main priorities and she loved working on both.”

Nowadays, Stassi Schroeder and Beau Clark are focused on the birth of their child. And it seems like the couple is doing well.